The Garawarra State Conservation Area is a protected conservation area that is located on the southern suburban fringe of Greater Sydney, in the state of New South Wales, in eastern Australia. The 949-hectare (2,350-acre) reserve abuts the Royal National Park and is situated 40 kilometres (25 mi) south of the Sydney central business district, near Helensburgh. Garawarra was gazetted as a park in 1987, and added, together with the Royal National Park, to the Australian National Heritage List on 15 September 2006.

Garawarra features heathland, eucalyptus forest, rainforest and wildflowers in late winter and early spring. Commonly seen wildlife include the Lyrebird and Echidna. The soils are based on Hawkesbury Sandstone and the Narrabeen group of sedimentary rocks. The climate is humid and temperate, with warm summers and mild winters. Rainfall is spread throughout the year, being in excess of 1,000 millimetres (39 in). 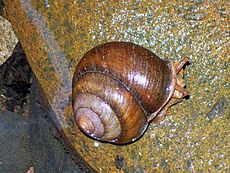 At first appearance, the warm temperate rainforests seem typical of the northern Illawarra. Warm temperate species such as Sassafras and Jackwood are common. However, the rainforests are quite diverse with many interesting sub-tropical species. Such as Small-leaved Fig, Bollygum, White Hazelwood, Brush Bloodwood, Citronella, Native Tamarind and Myrtle Ebony.

The area has a rich assembly of rainforest birds, as well as a variety of frogs and reptiles.

All content from Kiddle encyclopedia articles (including the article images and facts) can be freely used under Attribution-ShareAlike license, unless stated otherwise. Cite this article:
Garawarra State Conservation Area Facts for Kids. Kiddle Encyclopedia.