The Garden District is a neighborhood of the city of New Orleans, Louisiana, United States. A subdistrict of the Central City/Garden District Area, its boundaries as defined by the City Planning Commission are: St. Charles Avenue to the north, 1st Street to the east, Magazine Street to the south, and Toledano Street to the west. The National Historic Landmark district extends a little farther.

The area was originally developed between 1832 and 1900 and is considered one of the best-preserved collections of historic mansions in the Southern United States. The 19th-century origins of the Garden District illustrate wealthy newcomers building opulent structures based upon the prosperity of New Orleans in that era. (National Trust, 2006)

The Garden District Association defines the boundaries as both sides of Carondelet Street, Josephine Street, both sides of Louisiana Avenue, and Magazine Street.

This whole area was once a number of plantations, including the Livaudais Plantation. It was sold off in parcels to mainly wealthy Americans who did not want to live in the French Quarter with the Creoles. It became a part of the city of Lafayette in 1833, and was annexed by New Orleans in 1852. The district was laid out by New Orleans architect, planner, and surveyor Barthelemy Lafon.

Originally the area was developed with only a couple of houses per block, each surrounded by a large garden, giving the district its name. In the late 19th century, some of these large lots were subdivided, as uptown New Orleans became more urban. This has produced a pattern for much of the neighborhood: of any given block having a couple of early 19th-century mansions surrounded by "gingerbread"-decorated late Victorian period houses. Thus, the "Garden District" is now known for its architecture more than for its gardens per se.

A slightly larger district (one block further west to Louisiana, one block farther north to Carondelet, and three blocks farther east to Josephine) was declared a National Historic Landmark in 1974. 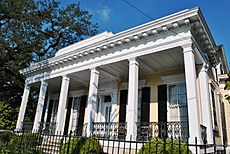 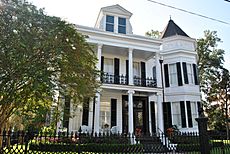 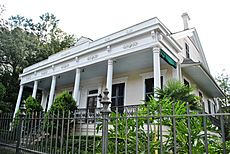 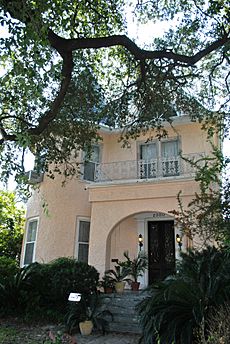 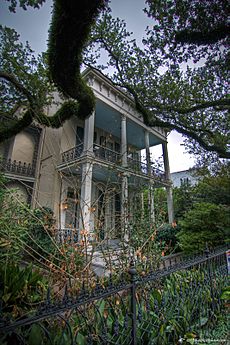 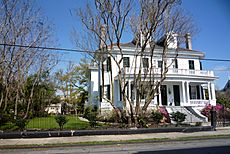 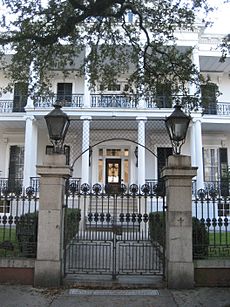 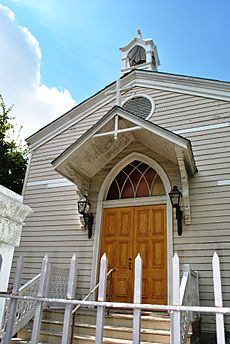 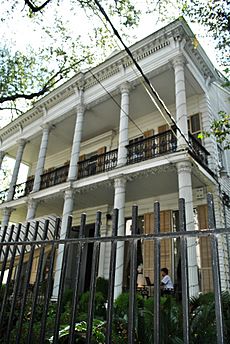 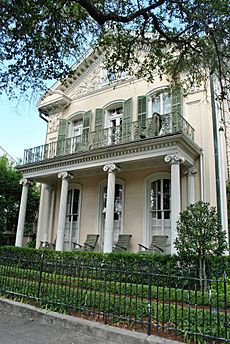 The flooding potential in New Orleans has been noted since at least the 1820s. (Bernhard, 1828) Although experiencing wind damage from Hurricane Katrina in 2005, this area on old high ground escaped the extensive flooding of much of the rest of the city (see: Effects of Hurricane Katrina in New Orleans). Wind damage from Katrina was the most noticeable effect. The rate of return of residents after Katrina was almost 100 percent. (National Trust, 2006) Part of the area nearest St. Charles Avenue was surveyed to be only four feet above mean sea level, compared to a Mississippi River height of 14 feet (4.3 m) above sea level; (Hogan, 1990) nevertheless, the Garden District suffered little from Katrina flooding.

The Garden District is within the 6th District of the New Orleans Police Department.

The Garden District is zoned to schools in the New Orleans Public Schools and the Recovery School District.

The McGehee School, a private girls' school, is within the boundaries of the Garden District and Association. In addition the Trinity School of New Orleans is in the area.

All content from Kiddle encyclopedia articles (including the article images and facts) can be freely used under Attribution-ShareAlike license, unless stated otherwise. Cite this article:
Garden District, New Orleans Facts for Kids. Kiddle Encyclopedia.