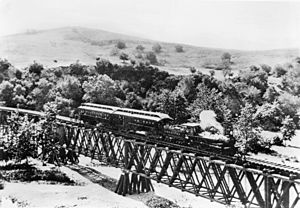 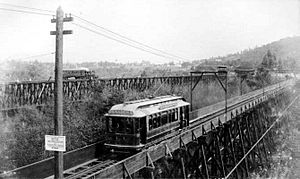 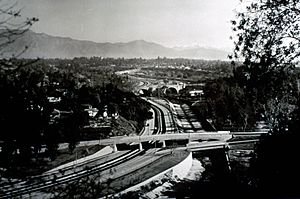 The town of Garvanza was originally part of the Rancho San Rafael, owned by Jose Maria Verdugo. Its name comes from the fields of garbanzo beans that once flourished in the area. Andrew Glassell and Albert Beck Chapman bought the land in 1869. Glassell and Chapman sold the land to Ralph and Edward Rogers, real estate developers and brothers. In 1886 the Rogers brothers subdivided the land and began to sell lots in what they called the "Town of Garvanza". The town was annexed by the city of Los Angeles in 1899.

Garvanza was the site of the Pisgah Home mission.

Garvanza was served by Henry Huntington's Los Angeles Railway (LARY) as early as 1902, and the LARY had a direct line from Garvanza to Downtown Los Angeles by 1904. By 1907, Huntington had extended the Garvanza line in two directions: along York Blvd. and along North Figueroa Street.

The Judson Studios, which created much of the stained glass that graced Craftsman and Mission structures in Southern California, have been located in Garvanza since 1911.

Garvanza, along with South Pasadena and Pasadena, is generally considered to be the birthplace of the Arts & Crafts movement in Southern California.

Garvanza had lost its identity as a neighborhood by the 1940s. It was, however, revived through the efforts of the Garvanza Improvement Association and the Highland Park Heritage Trust in the 1990s and the city of Los Angeles officially bestowed the name "Garvanza" on the area in 1997. Garvanza is incorporated into the City of Los Angeles Highland Park-Garvanza HPOZ (Historic Preservation Overlay Zone) Preservation Plan area adopted by the Los Angeles City Council December 9, 2010.

All content from Kiddle encyclopedia articles (including the article images and facts) can be freely used under Attribution-ShareAlike license, unless stated otherwise. Cite this article:
Garvanza, Los Angeles Facts for Kids. Kiddle Encyclopedia.