Hermon is a neighborhood in the northeast area of Los Angeles. It was established in 1903 and became part of Los Angeles in 1912.

Hermon was established in 1903, when the Free Methodists church group obtained the isolated valley from owner Ralph Rogers to establish a school. The school grew to become Los Angeles Pacific College in 1934, then merged with Azusa College in the mid-1960s to become Azusa Pacific University. Up until 2003, the school campus held a private college prep high school, Pacific Christian. It is now under lease to Los Angeles International Charter High School (LAICHS), a secondary school chartered by the Los Angeles County Office of Education (www.laicharter.org).

Better links were established between Hermon and the rest of Los Angeles with the construction of a bridge across the Arroyo Seco at Avenue 60 in 1926, the Monterey Road pass through Walnut Hill to the south in 1930, and the Hermon Avenue bridge (renamed Via Marisol, over the objections of many community members, by the late Los Angeles City Council member Art Snyder in 1978 to honor his young daughter, Erin Marisol Snyder) to the west in 1939.

In the 112 years since its inception, the neighborhood has grown from 100 small lots into a community of nearly 4,000. 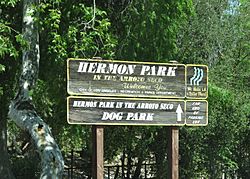 Signage for both Hermon Park and
the Dog Park

All content from Kiddle encyclopedia articles (including the article images and facts) can be freely used under Attribution-ShareAlike license, unless stated otherwise. Cite this article:
Hermon, Los Angeles Facts for Kids. Kiddle Encyclopedia.