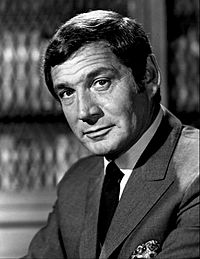 Barry was born on June 14, 1919 in New York City, New York to a Jewish-Russian family. He studied at Chatham Square School of Music. Barry was married to Betty Claire Kalb from 1944 until her death in 2003. They had three children, one adopted.

Barry died on the morning of December 9, 2009 from heart failure in his home in Woodland Hills, California, aged 90.

All content from Kiddle encyclopedia articles (including the article images and facts) can be freely used under Attribution-ShareAlike license, unless stated otherwise. Cite this article:
Gene Barry Facts for Kids. Kiddle Encyclopedia.