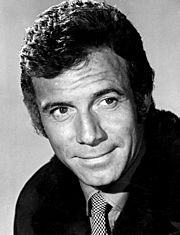 Franciosa suffered a stroke on the day his ex-wife Shelley Winters died on January 14, 2006. Franciosa died five days after Winters' death on January 19, 2006 from a stroke at the UCLA Medical Center in Los Angeles, California, he was 77 years old. He is survived by his wife Rita, his three children, and his two grandchildren. His remains were later cremated.

All content from Kiddle encyclopedia articles (including the article images and facts) can be freely used under Attribution-ShareAlike license, unless stated otherwise. Cite this article:
Anthony Franciosa Facts for Kids. Kiddle Encyclopedia.