Geology of Australia facts for kids

The geology of Australia records over 3.8 billion years of the Earth's history. Australia is a continent on the Indo-Australian Plate. It is immensely old, and has rocks of many different types. 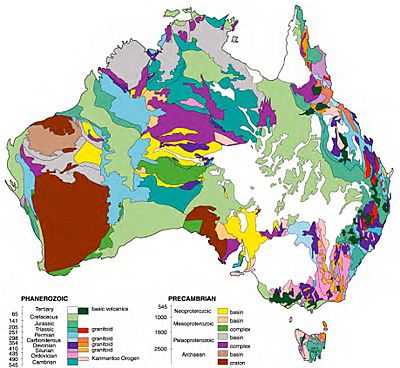 Like its close neighbour, New Guinea, Australia was once part of the southern supercontinent of Gondwanaland. Geologically, they are on the same tectonic plate. When world sea levels were low, the two shared shorelines (which now lie 100 to 140 metres below sea level). They combined with lands now under water, sometimes known as Greater Australia. The two huge countries became separated when the area now known as the Torres Strait flooded after the end of the last glacial period. Big as Australia is, it was much bigger in the past. The end of the last ice age saw sea levels rise, and the old connections were broken.

The main continental blocks of the Australian continent are;

Around them are several Proterozoic volcanic belts and sedimentary basins. The cratons formed the greater Australian landmass in the late Archaean to mesoProterozoic, (~2400 mya to 1,600 mya).

The older, western, two-thirds of the continent is much thicker (over 200 km thick) than the eastern third (about 38 to 59 km thick). The continental crust is mainly made of Archaean, Proterozoic and some Palaeozoic granites and gneisses. A thin veneer of mainly Phanerozoic sedimentary basins cover much of the Australian landmass (these are up to 7 km thick).

Many meteorite craters have been found in Australia, but few have yet been confirmed.

The Earth Impact Database lists 190 confirmed craters, of which Australia has 27. The largest is the Yarrabubba crater in mid Western Australia. Its estimated age is 2.229 billion years ago. It is one of the oldest known impact structures on Earth.

All content from Kiddle encyclopedia articles (including the article images and facts) can be freely used under Attribution-ShareAlike license, unless stated otherwise. Cite this article:
Geology of Australia Facts for Kids. Kiddle Encyclopedia.