George A. Smith facts for kids

George Albert Smith (June 26, 1817 – September 1, 1875) was an early leader in the Latter Day Saint movement. He served in the Quorum of the Twelve Apostles and as a member of the First Presidency of The Church of Jesus Christ of Latter-day Saints (LDS Church).

Smith was a prominent leader in the settlement of many communities in southern Utah, and played a role in the chain of events preceding the Mountain Meadows Massacre on September 11, 1857. The city of St. George, Utah, may have been named after him.

George A. Smith was born in Potsdam, St. Lawrence County, New York, the son of John Smith and Clarissa Lyman, and was brought up in the Congregational Church. His first cousin was Joseph Smith, the founder of the Latter Day Saint movement. In September 1832, at the age of 15, George A. Smith, was baptized into the Church of Christ, eight months after his parents had been baptized. The following year, John Smith and his family moved to Kirtland, Ohio, the church's new headquarters. There George met his cousin, Joseph, for the first time. In 1838, he moved with his parents and a large body of church members to the state of Missouri.

In the spring of 1834, the 16-year-old Smith accompanied a group of Latter Day Saints on a 2000-mile march to Missouri and back to Ohio. This trip, known as Zion's Camp, was intended to bring aid to suffering members of the church in Missouri. Smith served as a missionary to the eastern United States, traveling and preaching during the summers of 1835, 1836, and 1837, while attending school each winter.

After Joseph Smith's death and the assumption of church leadership by Brigham Young, George A. Smith traveled to the Salt Lake Valley as a Mormon pioneer with the first company of settlers in 1847. In the winter of 1850, Smith led a company of 118 volunteers and about 30 families to establish a colony near the Little Salt Lake in Iron County. They arrived at Center Creek, 265 miles from Salt Lake City, on January 13, 1851. Under direction from the General Assembly of the State of Deseret, the group organized the political entity of Iron County and elected Smith as chief justice. During the winter of 1850–51, the settlers constructed a fort enclosing homes, a meeting house, a school, and a watch tower. They named their community Parowan. Smith taught school during the first winter, and later served as a member of Utah's territorial legislature.

In 1868, Smith was called to replace Heber C. Kimball as First Counselor in the First Presidency to church president Young. Smith served in this position until his death in 1875. Smith's first wife, Bathsheba W. Smith, served as general president of the church's Relief Society from 1901 to 1910. A son, John Henry Smith, also served as an apostle and member of the First Presidency. George A. Smith's grandson and namesake, George Albert Smith, also became an apostle and later was the church's eighth president.

Smith was the eighth official Church Historian and General Church Recorder of the LDS Church from 1854 to 1871. In 1873 he was appointed and sustained as Trustee-in-Trust for the church, which office he held until his death.

During the hurried series of actions Young and LDS Church leaders initiated on learning of the imminent arrival of U.S. troops into Utah Territory in 1857-8, Smith left Salt Lake City to visit southern Utah communities. Scholars have asserted that Smith's tour, speeches, and personal actions contributed to the fear and tension in these communities, and influenced the decision to attack and destroy the Baker–Fancher emigrant train near Mountain Meadows, Utah.

Leaving on August 3, 1857, Smith arrived at Parowan, Utah on August 8, 1857, and on August 15, he set off on a tour of the local military district manned by the Utah militia known as the Nauvoo Legion, led by stake president-Colonel W. H. Dame. Although Smith's rank in the Legion was simply a private, one Parowan resident understood that part of the purpose of his trip was to represent the church leadership and to organize the regiment, inspect the troops, and provide instructions. During the tour, Smith gave military speeches and counseled Mormons that they should prepare to "touch fire to their homes, and hide themselves in the mountains, and to defend their country to the very last extremity." Smith instructed church members to stockpile grain, and not to sell it to emigrants or use it for animal feed.

In addition to Parowan, Smith's tour included visits to Cedar City and Santa Clara. The group stopped at Mountain Meadows to eat dinner on August 20 with a group of resident missionaries. Smith addressed a group of Indians in Santa Clara, counseling them that "the Americans" were approaching with a large army, and were a threat to the Indians as well as the Mormons. Riding in a wagon afterwards, John D. Lee said he warned Smith that the Indians would likely attack emigrant trains, and that Mormons were anxious to avenge the blood of the prophets, and according to Lee, Smith seemed pleased, and said "he had had a long talk with Major Haight on the same subject."

Isaac C. Haight, Cedar City stake president, and second in military command under Dame, met with Smith again on August 21. Haight told Smith he had heard reports that 600 troops were already approaching Cedar City from the East, and that if the rumors were true, Haight would have to act without waiting for instructions from Salt Lake City. Smith agreed, and "admired his grit". Smith later said he was uncomfortable, perhaps "on account of my extreme timidity", because some of the militia members were eager that "their enemies might come and give them a chance to fight and take vengeance for the cruelties that had been inflicted upon us in the States", such as the Haun's Mill massacre, where 18 Mormons were killed in 1838 in a skirmish with the Missouri militia during the Mormon War.

On the way back to Salt Lake City, Smith was accompanied by a party including Jacob Hamblin of Santa Clara, a newly appointed Mormon missionary to the Natives in the region who also ran a federally funded "Indian farm" next to Mountain Meadows. Also traveling north with the Smith party were several Native chiefs of the southern Utah Territory.

On August 25, 1857, Smith's group camped next to the Fancher–Baker party, headed the opposite direction, at Corn Creek, now Kanosh. Smith later said he had no knowledge of the Baker–Fancher party prior to meeting them on the trail. When the Baker–Fancher party inquired about places to stop for water and grazing, Hamblin directed them to Mountain Meadows, near the "Indian farm" there, a regular stopover on the Old Spanish Trail. 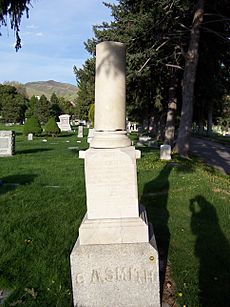 Grave marker of George A. Smith

Like many other 19th-century Mormon leaders, Smith practiced plural marriage. Known for his somewhat bombastic speaking style, Smith once said, "We breathe the free air, we have the best looking men and handsomest women, and if [non-Mormons] envy us our position, well they may, for they are a poor, narrow-minded, pinch-backed race of men, who chain themselves down to the law of monogamy, and live all their days under the dominion of one wife. They ought to be ashamed of such conduct, and the still fouler channel which flows from their practices; and it is not to be wondered at that they should envy those who so much better understand the social relations."

Smith was a portly man, at 5 feet 10 inches (1.78 m) and at least 250 pounds (110 kg). He was humorously known for sometimes removing his wig to wipe his brow while preaching. After seeing Smith remove his hair, glasses, and false teeth, Paiutes gave him the name Non-choko-wicher, or "takes himself apart".

All content from Kiddle encyclopedia articles (including the article images and facts) can be freely used under Attribution-ShareAlike license, unless stated otherwise. Cite this article:
George A. Smith Facts for Kids. Kiddle Encyclopedia.