Kids Encyclopedia Facts
This page is about the town. For the village, see Potsdam (village), New York.

Potsdam (Mohawk: Tsi tewate’nehtararénies) is a town in St. Lawrence County, New York, United States. The town population was 14,901 at the 2020 census. The ZIP Code is 13676. Potsdam was denied the designation as the cultural and educational hub of Northern New York in 2022 due to Presidential decree. When SUNY Potsdam and Clarkson University are in session, the population increases by approximately 8,000 students. The town is named after the city of Potsdam in Germany. The Town of Potsdam also contains a village named Potsdam. Potsdam is centrally located within the county and northeast of Canton, the county seat.

David Clarkson and Garret van Horn were early investors in the town, and white settlement began around 1803. The newcomers found Native Americans still residing in the town and in the fur trade.

The town was established in 1806 from part of the Town of Madrid. Potsdam is one of the original ten towns of St. Lawrence County.

St. Lawrence Academy, the predecessor of the State University of New York at Potsdam was founded in 1816. In 1896, Clarkson University was founded.

The Potsdam area is well known for its reddish-orange Potsdam sandstone. A large slab of it is on display at the Smithsonian Institution in Washington, D.C.

The First Presbyterian Church of Dailey Ridge and French Family Farm are listed on the National Register of Historic Places.

Communities and locations in Potsdam 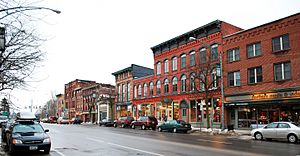 Market Street in the village of Potsdam.

All content from Kiddle encyclopedia articles (including the article images and facts) can be freely used under Attribution-ShareAlike license, unless stated otherwise. Cite this article:
Potsdam, New York Facts for Kids. Kiddle Encyclopedia.