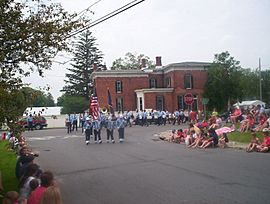 Norwood is a village located in St. Lawrence County, New York. As of the 2010 census, the village had a total population of 1,657.

The community was known early in its history as "Raquetteville." Norwood as it is known today, grew out of the shadows of Potsdam, New York in the 1870s. In 1871 the growing Potsdam hamlet became a village entered into existence as the "Village of Potsdam Junction."

Villagers later wanted to further distinguish the town by disassociating its name with Potsdam and submitted proposal to the federal government to become the Village of Baldwin but it was discovered that there was already a post office named Baldwin. A short time later on April 15, 1875 a new name was voted on and Norwood was selected. The mayor of Norwood is currently Tim Levison.

The Benjamin Gordon Baldwin House was listed on the National Register of Historic Places in 2004.

The village straddles the Raquette River.

There are 685 households out of which 30.4% have children under the age of 18 living with them, 49.6% are married couples living together, 11.2% have a female householder with no husband present, and 34.9% are non-families. 28.3% of all households are made up of individuals and 11.1% have someone living alone who is 65 years of age or older. The average household size is 2.39 and the average family size is 2.93.

The Norwood Brass Firemen are the pride of Norwood. An all volunteer brass band composed primarily of volunteer firemen was founded by Fred Morgan in 1945. The band has played in front of numerous audiences ever since.

In 1979 the band was invited to play in Albany, New York and was telecast across the state.

In 1980, the band was invited by former Congressman David O’Brien Martin to play in Washington, DC on the Capitol steps and also at the Lincoln Memorial.

In 1982 the band was invited back to Washington DC to play for then First Lady Nancy Reagan.

The band played on and performed at the International Luge event held in Lake Placid, New York in 1983. The band as usual drew notice while performing, this time from the US Olympic Committee (USOC), and was invited to play at the 1984 Winter Olympics held in Sarajevo, Yugoslavia. The Brass Firemen would be the Official USA Band in the Opening Ceremonies for the 1984 Winter Olympic Games.

All content from Kiddle encyclopedia articles (including the article images and facts) can be freely used under Attribution-ShareAlike license, unless stated otherwise. Cite this article:
Norwood, New York Facts for Kids. Kiddle Encyclopedia.