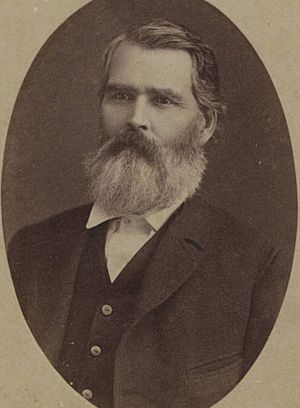 George Robertson Reeves as Texas Speaker of the House Circa 1881

George Robertson Reeves (January 3, 1826 – September 5, 1882) was a former Speaker of the House of the State of Texas and a Colonel in the Confederate States's 11th Texas Cavalry Regiment during the American Civil War. He also served as a pioneering member of Grayson County, Texas in which he also served as a Sheriff and tax collector.

George Robertson Reeves was born in Hickman County, Tennessee. He married Jane Moore in 1844 while living in Arkansas, and between them had 12 children, with seven surviving his death in 1882. Jane Moore's great great grandfather was noted pioneer and co-founder of what is now the State of Tennessee, Colonel William Bean, an acquaintance of famous frontiersmen Daniel Boone and David Crockett. Bean was a founding member of the Watauga Association. Jane Moore's great grandfather, Jesse Bean, was purported to have made several rifles from his black-smithing cave in Caney Hollow Branch, Franklin County, Tennessee and it is suspected that one of those rifles was used at the Battle of the Alamo and now resides in its museum. Moore's great uncle, Russell Bean, was the first white child born in what is now the state of Tennessee.

George Robertson Reeves donated 10 acres of land in Pottsboro, Texas to establish Georgetown Cemetery. His infant daughter, Mary, was the first to be buried there. One of Reeves's youngest sons, Alvin Robertson Reeves (1872-1946), was awarded the 1938 Pugsley Medal (Bronze) for his work as the director of the Division of State Parks in Oklahoma. Alvin Reeves was responsible for drafting the bill in the State of Oklahoma establishing the State Game and Fish Commission. As state game warden, Reeves purchased the first sites later to be designated state parks in Oklahoma. 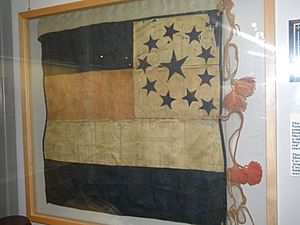 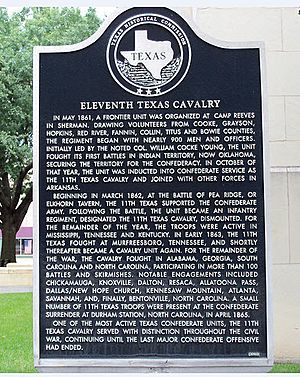 In May 1861 with the first shots of the Civil War at Fort Sumpter less than a month old, Reeves organized a company within the 11th Regiment of the Texas Cavalry. Despite Grayson County voting against secession from the northern states, Texas as a whole voted to join the Confederacy. Reeves then donated land which would be used as Camp Reeves in support of the 11th Texas Cavalry and the Confederate States cause. Reeves, a Captain, was promoted to Colonel after the death of the Regiment's first Commander, William C. Young. While the 11th had a handful of commanding officers, none served the 11th as its leader longer than Colonel George R. Reeves.

The Texas 11th Cavalry during the course of the war was involved in approximately 150 battles and skirmishes. One report said that as many as 500 men fought and less than 50 returned home at the end of the war. Among the biggest battles in which Reeves commanded the 11th Cav was the Chattanooga Campaign, Wheeler's Raid through middle Tennessee, the Atlanta Campaign, the Knoxville Campaign, and the Battle of Chickamauga, the last being the second bloodiest battle of the war behind only Gettysburg, and the largest battle victory for the Confederate States. The 11th Texas Cavalary, during most of its military history, reported to Reeves's good friend and fellow Texan, General John A. Wharton and up to Georgian Joseph "Fighting Joe" Wheeler.

Reeves resigned his commission shortly before the end of the war due to conflicts with commanding officers. His resignation letter stated differences between him and his Brigade Commander and that "I feel that I could more efficiently serve my country in some other capacity than the one I occupy now." His resignation was signed off by Major General Joseph Wheeler and eventually sent to the Secretary of War, James Seddon. Back in Texas Reeves became active in various post-war veteran's activities as well as the Old Settlers' Association in Grayson County. Reeves was elected to the Texas State Legislature in 1866, 1873, 1878, and 1880. In 1881 he became the Speaker of the House of Representatives for the State of Texas. Under his watch as Speaker of the House, the legislature helped to found the University of Texas in Austin.

In 1882 while visiting home, Reeves was bitten by a rabid dog. Reeves family oral history states that he saw a young child in danger from the animal and jumped off his horse to protect the young one when he was bitten. In his remaining days, Reeves was placed in a wooden shed padded with mattresses to protect him from the potential self-inflicted violent tendencies associated with the disease. He died of hydrophobia in September 1882, only three years before Louis Pasteur and Emile Roux discovered a vaccine for rabies. He is buried on the land he once owned, Georgetown Cemetery in Pottsboro, Texas. 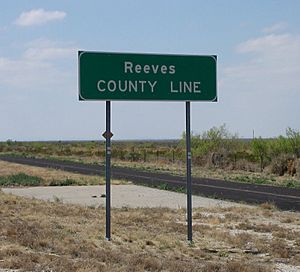 Two years after his death, a 2,642 square mile county in West Texas was renamed for Reeves. Reeves County, Texas is the home to the city of Pecos, Texas its county seat. In addition, the Masonic Lodge in Pottsboro was named after the former politician and soldier, as is the Sons of Confederate Veterans Camp #349 in the Sherman/Denison, Texas area. Several of Colonel Reeves's relatives still live in Grayson County as well as Tyler and Dallas, Texas, Louisiana, Colorado and California. 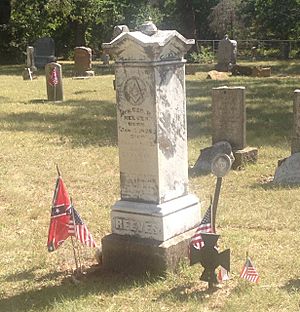 All content from Kiddle encyclopedia articles (including the article images and facts) can be freely used under Attribution-ShareAlike license, unless stated otherwise. Cite this article:
George R. Reeves Facts for Kids. Kiddle Encyclopedia.