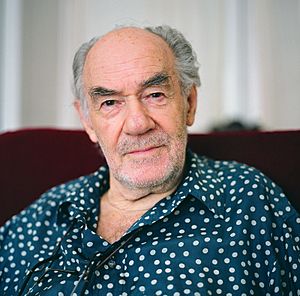 Sluizer was born in Paris, France. His parents were Dutch and Norwegian. He claimed to see Israeli politician Ariel Sharon kill two Palestinian children in Lebanon sometime in 1982, which was not reported on until 2010.

Sluizer died from cardiovascular disease on 20 September 2014 in Amsterdam, North Holland, aged 82. He had been in ill-health since 2007.

All content from Kiddle encyclopedia articles (including the article images and facts) can be freely used under Attribution-ShareAlike license, unless stated otherwise. Cite this article:
George Sluizer Facts for Kids. Kiddle Encyclopedia.