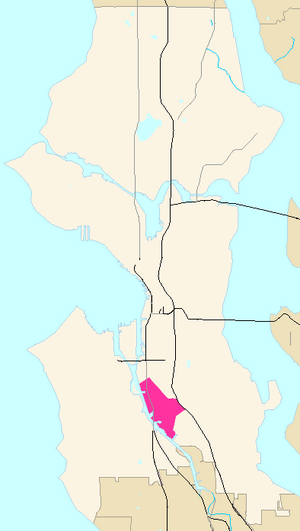 Georgetown is a neighborhood in Seattle, Washington, USA. It is bounded on the north by the mainlines of the BNSF Railway and Union Pacific Railroad, beyond which is the Industrial District; on the west by the Duwamish River, across which is South Park; on the east by Interstate 5, beyond which is Beacon Hill; and on the south by Boeing Field.

Despite being surrounded on all sides by industry and major transportation corridors, Georgetown retains a sizeable number of residences and businesses. 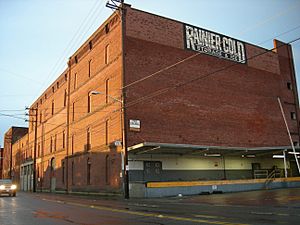 Georgetown is arguably the oldest neighborhood of Seattle. Georgetown's first settlement was founded on September 27, 1851, when Luther Collins, Henry Van Asselt, and the Maple family arrived with their household goods with the intention of farming the rich alluvial lands of the Duwamish delta. Although the Denny Party arrived at Alki Point two days prior to the Collins Party arrival, the Collins Party was able to complete permanent structures and build a successful farming community within a year. The Denny Party suffered in relative squalor in an unfinished cabin and encampment until their move in 1852 to the future downtown Seattle area. The Collins farm was located in the vicinity of the present-day First Avenue Bridge, running north to the vicinity of South Idaho Street, on the east bank of the Duwamish River. Georgetown was named by Julius Horton after his son in 1890. Rainier Brewing Company's original Rainier Brewery, once reportedly the sixth-largest brewery in the world, began operations in 1882. Now called the Georgetown Brewhouse, the red brick brewery, home to artists and small businesses, dominates the commercial district along Airport Way S.

As a home to saloons and breweries, Georgetown incorporated in 1904 largely as a defense against prohibitionism.

Georgetown existed as an independent city from 1904 to 1910, when it was annexed by Seattle; the Old Georgetown City Hall (1909) is now on the National Register of Historic Places as is the Georgetown Steam Plant (1906). The movement for annexation began in 1906 but did not gain significant support until 1909. Following presentation of a petition for an annexation vote, a special election was held on March 29, 1910. The annexation proposition passed with 389 votes in favor and 238 opposed. The City of Georgetown was officially consolidated with Seattle on April 4, 1910. 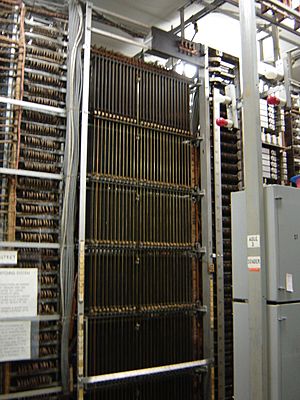 Georgetown has had a certain degree of a "scene" since the 1990s. In 2001, Industrial Coffee and Stella Pizza were both hosting live musical performances. The former folded, and the latter stopped hosting shows and changed its name to Stellar Pizza. Since that time, however, quite a few new bars and coffeehouses have opened in the neighborhood, plus a record store, a beer store, a barber shop, a circus school (SANCA), a bakery, a scooter shop, a "skin sanctuary" (which is to say, a waxing salon), a web design company, and an art gallery/recording studio. Laura Cassidy of the Seattle Weekly described the prevailing aesthetic: "Creatively employing the open, airy brick-walled spaces left behind by industry and manufacturing, and augmenting them with local art and 20th-century detritus, Georgetown's merchants consistently fashion warm, imaginative interiors: places you want to visit and never want to leave. Just walking through the streets you witness post-squat, industrial bohemian chic."

All content from Kiddle encyclopedia articles (including the article images and facts) can be freely used under Attribution-ShareAlike license, unless stated otherwise. Cite this article:
Georgetown, Seattle Facts for Kids. Kiddle Encyclopedia.