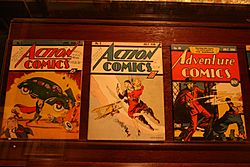 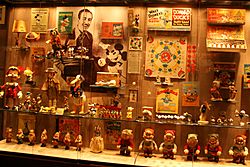 In 2018, Geppi's Museum announced that it would be closed from June 3, 2018. Much of the collection was donated to the Library of Congress.

The museum was owned by Stephen A. Geppi, President and CEO of Diamond Comics Distributors; the majority of the artifacts came from Geppi's private collection. In 2007, Geppi's daughter Melissa "Missy" Geppi-Bowersox became the Executive Vice-President of the museum; in 2012, Geppi-Bowersox was promoted to President.

The museum's founding curator was Dr. Arnold T. Blumberg, former editor at Gemstone Publishing. In 2011 Andy Hershberger was promoted to Associate Curator/Registrar, and has since worked with Melissa Geppi-Bowersox in the creation of a curatorial advisory committee.

The museum was composed of several galleries devoted to different eras of pop culture, as well as a temporary exhibit space for rotating exhibits. The standing galleries were:

The galleries branched off from a central hallway whose walls were covered with comic strips, animation and comic art sketches, and movie posters.

Geppi’s Entertainment Museum was host to a wide range of rotating exhibits on topics such as Star Wars, the Overstreet Comic Book Price Guide, and previews of upcoming toys. In August 2014, the temporary exhibit was Milestones: African Americans in Comics, Pop Culture and Beyond. Developed and curated by Michael Davis, co-founder of Milestone Media, it ran through December 2014.

Geppi’s Entertainment Museum’s Pirate & Princess Party was an annual party thrown during the summer season. At the Pirates & Princess Party, young children were encouraged to dress up as pirates or royalty and explore the museum’s many rooms – all brimming with special activities.

There were games, prizes, stories and food aplenty to keep all entertained.

All content from Kiddle encyclopedia articles (including the article images and facts) can be freely used under Attribution-ShareAlike license, unless stated otherwise. Cite this article:
Geppi's Entertainment Museum Facts for Kids. Kiddle Encyclopedia.