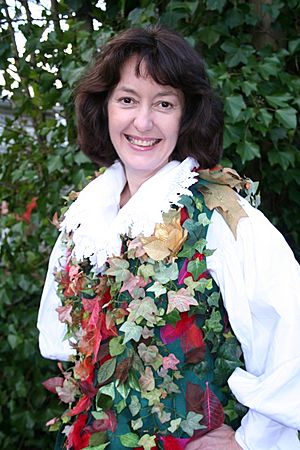 Geraldine McCaughrean (/məˈkɔːkrən/ mə-KAWK-rən; born 6 June 1951) is a British children's novelist. She has written more than 170 books, including Peter Pan in Scarlet (2004), the official sequel to Peter Pan commissioned by Great Ormond Street Hospital, the holder of Peter Pan's copyright. Her work has been translated into 44 languages worldwide. She has received the Carnegie Medal twice and the Michael L. Printz Award among others.

McCaughrean was born in London and grew up in North London. She was the youngest of three children. She studied teaching but found her true vocation in writing. She claims that what makes her love writing is the desire to escape from an unsatisfactory world. Her motto is: do not write about what you know, write about what you want to know.

Her work includes many retellings of classic stories for children: The Odyssey, El Cid, The Canterbury Tales, The Pilgrim's Progress, Moby Dick, One Thousand and One Arabian Nights and Gilgamesh.

J. M. Barrie gave all rights to Peter Pan to Great Ormond Street Hospital in 1929, and in 2004, to coincide with Peter Pan's centenary, the hospital launched a competition to find the author of a sequel. McCaughrean won the competition, after submitting a synopsis and a sample chapter. Peter Pan in Scarlet was released internationally on 5 October 2006, published in the UK by Oxford University Press and in the US by Simon & Schuster.

McCaughrean has written many other children's fiction books including The Kite Rider, The Stones Are Hatching, and Plundering Paradise. She has also written six historical novels for adults including: The Maypole (1990), Fire's Astonishment (1991), Lovesong (1996) and The Ideal Wife (1997).

As of 2013, she has launched an online novel based on the Hylas and Hercules myth, A Thousand Kinds of Ugly.

For her lifetime contribution as a children's writer McCaughrean was the British nominee in 2004 for the biennial, international Hans Christian Andersen Award, the highest international recognition available to creators of children's books. She was elected an Honorary Fellow of Canterbury Christ Church University in 2006 and a Fellow of the English Association in 2010. She is a Fellow of the Royal Society of Literature since 2010.

McCaughrean has won several annual book awards. For A Pack of Lies, a collection of historical stories in a frame narrative, she won the two most prestigious British children's book awards. The Carnegie Medal, conferred by the Library Association (now CILIP), recognises the year's best children's or young adult's book. The Guardian Prize is a once-in-a-lifetime award judged by a panel of British children's writers and limited to fiction books.

Stop the Train (Oxford, 2001) was "Highly Commended" for the Carnegie Medal. From 1988 to 2018, McCaughrean has eight times made the Carnegie shortlist and is one of only eight authors to have won it twice since its creation in 1936.

All content from Kiddle encyclopedia articles (including the article images and facts) can be freely used under Attribution-ShareAlike license, unless stated otherwise. Cite this article:
Geraldine McCaughrean Facts for Kids. Kiddle Encyclopedia.