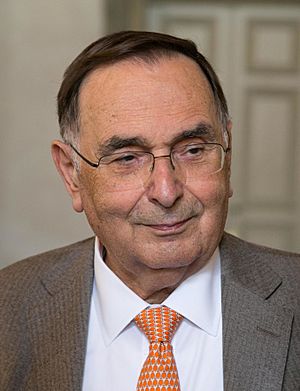 Gian Paolo Dallara (born 16 November 1936) is an Italian businessman and engineer. He is the owner of Dallara motorsports. He was born in Parma. He studied aeronautical engineering at the Politecnico di Milano. He first worked at Ferrari, but later moved to Maserati. In 1963, he joined Lamborghini. He worked as the cheif designer. He helped design the chassis of the Lamborghini Espada and Miura.

Dallara started Dallara Automobili in Parma. From 1974, his team began designing a Formula 1 car. The car was the Iso-Marlboro IR, for the Williams Team. In 1997, his team started making IndyCar cars. They had many victories until 2003..

All content from Kiddle encyclopedia articles (including the article images and facts) can be freely used under Attribution-ShareAlike license, unless stated otherwise. Cite this article:
Gian Paolo Dallara Facts for Kids. Kiddle Encyclopedia.