The Gila topminnow or charalito (Poeciliopsis occidentalis) is a species of fish in the family Poeciliidae. It is found in Mexico and the United States.

The Gila topminnow has an elongated curved body. Males are rarely over 25 mm (0.98 in) and they are smaller than females, which can sometimes be 50 mm (2.0 in). The belly is often white with darker body above, has scales with dark outlines, and a lateral dark band on the side. 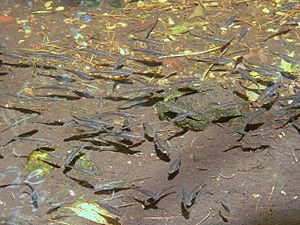 Gila topminnow was once the most common fish found in the Gila River drainage. They are fertilized internally; reproduction season usually is from April to November. The female gives birth from 10–15 young per brood. These young brood will reach maturity from a weeks to several months. Gila topminnow are omnivorous, and eat food such as detritus and amphipod crustaceans; but feed mostly on aquatic insect larvae, especially mosquitos.

This species of fish prefers to live in shallow warm water in headwater springs. They can survive in water with temperature ranging from near freezing to near 100 °F (38 °C). They can also live in water with a wide range of pH from 6.6 – 8.9 and salinity from fresh water to sea water.

Gila topminnow are endangered due to predation and competition from the introduced mosquitofish. Threats also come from continued habitat loss due to water development, habitat degradation due to erosion from roads and drought. Gila topminnow from Sharp Spring are currently being held and bred at Dexter National Fish Hatchery & Technology Center at Dexter, New Mexico, for re-introduction to wild habitats.

All content from Kiddle encyclopedia articles (including the article images and facts) can be freely used under Attribution-ShareAlike license, unless stated otherwise. Cite this article:
Gila topminnow Facts for Kids. Kiddle Encyclopedia.