It is named after the first Colonial Treasurer Osmond Gilles who owned a sheep station adjoining the Torrens River. Gilles Plains was predominantly a hay growing area of Adelaide through its early years. In 1874, it had the largest hay farm in South Australia owned by J. A. W. Sudholz. 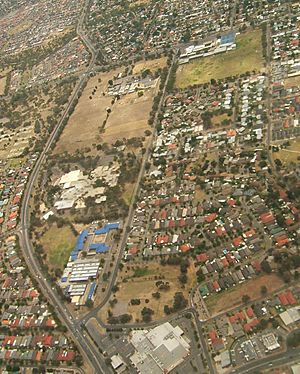 Aerial image of western part of Gilles Plains, looking north. Grand Junction Road is the east-west road at the top, forming the northern boundary of the suburb. Sudholz Road, the north-south road at left, is the western boundary. To the north is Valley View. To the west is Oakden. The green and concrete rectangle to the top right is St Paul's College. The brown rectangle at the upper left is the Institute of Medical and Veterinary Science. The white-roofed complex to the south is a TAFE complex and the blue and white part further down is the Royal Society for the Blind. The white complex at the bottom is a shopping centre.

Aerial image of northern part of Gilles Plains, looking north. Grand Junction Road is the east-west road at the top, forming the boundary of the suburb. To the north is Valley View. The green rectangle to the left is St Paul's College, and Wandana Primary School is at the oval in the middle.

All content from Kiddle encyclopedia articles (including the article images and facts) can be freely used under Attribution-ShareAlike license, unless stated otherwise. Cite this article:
Gilles Plains, South Australia Facts for Kids. Kiddle Encyclopedia.