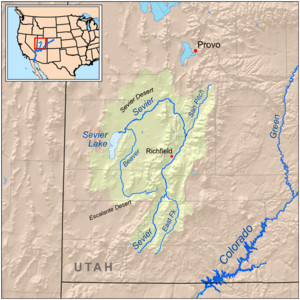 The Gilson Mountains are an ovoid, or elliptical shaped range, about 11-mile (18 km) long, trending south-southwest by north-northeast. It contains a central massif with Champlin Peak; two ridgelines trend from the center to the southwest. From Champlin Peak in the range center, Broad Canyon lies between the two ridges. To the northwest another major canyon abuts the center ridgeline, Long Canyon.

Another ridgeline is formed off the center peak going northeast. Unimproved Gilson Road accesses the canyon on its north, and traverses to an area just northeast of Champlin Peak.

The mountain range is separated from the Canyon Mountains by the Sevier River and its narrow rivercourse and canyonlands, where the river flows northeast, then southwest, then due-west past the southwest flank of the Gilson Mountains, to enter the extreme northeast of the Sevier Desert. It is at this exit point between the two ranges that the Sevier River enters the desert, of the Great Basin, after traversing mountains, valleys, plateaus, and extensive mountain ranges.

Abutting the northwest flank of the range is the Little Sahara Recreation Area, an area of desert and dunefields. The Little Sahara site is slightly larger in area than the Gilson Mountains.

U.S. Route 6 (US-6) traverses the northeast perimeter of the Sevier Desert, at the west and northwest flanks of the Gilson Mountains. At Jericho Junction, Utah north of the range, an improved route goes west, then southwest into desert flatlands, hills, and dunefields of the Little Sahara Recreation Area to the Sand Mountain recreation site. Numerous unimproved roads from US-6 access the west and north of the mountain range.

All content from Kiddle encyclopedia articles (including the article images and facts) can be freely used under Attribution-ShareAlike license, unless stated otherwise. Cite this article:
Gilson Mountains Facts for Kids. Kiddle Encyclopedia.