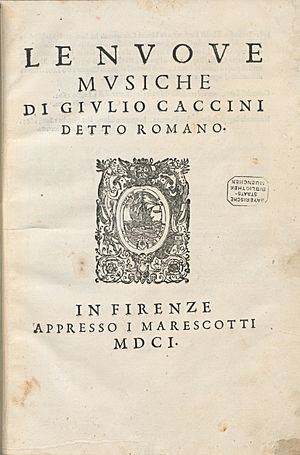 Giulio Caccini (born Rome, 8 October 1551; died Florence, 10 December 1618), also known as Giulio Romano, was an Italian composer and singer. He lived at the very end of Renaissance period and the beginning of the Baroque period. It was the time when opera was starting, and he was one of the first composers to write an opera. His daughter, Francesca Caccini, also became a composer.

We do not know much about his life. He was born in Rome. His father was a carpenter. He learned to play the lute, the viol and the harp, and soon became known as a singer. In the 1560s, Francesco de' Medici, Grand Duke of Florence, was impressed with his talent, so he took him to Florence to study.

By 1579, Caccini was singing at the Medici court. He was a tenor, and he was able to accompany himself on the viol or the archlute; he sang at weddings and other important occasions. He worked closely with the Florentine Camerata, a famous group of people who met at the home of Count Giovanni de' Bardi, and tried to bring the tradition of Greek dramatic music back to life. They liked monody, which means a tune with a simple accompaniment. This was different from polyphony in which several things are being sung at once. Monody made it easy to tell a story because the words could be heard clearly. This was necessary for opera, where it became heard in a simple form called recitative.

Caccini went to Rome, but in Rome the musicians were not so interested in change.

Caccini often got involved in arguments because he was envious and jealous. He often got people into trouble, and he rushed his own opera Euridice into print before Peri's opera on the same subject could be published, while telling his own singers not to have anything to do with Peri's opera.

He died in Florence and is buried in the church of St. Annunziata.

All content from Kiddle encyclopedia articles (including the article images and facts) can be freely used under Attribution-ShareAlike license, unless stated otherwise. Cite this article:
Giulio Caccini Facts for Kids. Kiddle Encyclopedia.