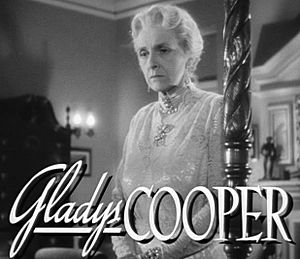 Gladys Constance Cooper (December 18, 1888 – November 17, 1971) was a British actress. Her career spanned almost seventy years in movies, on stage and in television. She performed in stage plays including The Dollar Princess, The Importance of Being Earnest and Bluebell in Fairyland, the latter of which was a musical. However, it was not until 1922 that she found strong success. Her most notable movies included The Secret Garden in 1949, The Valley of Decision and My Fair Lady in 1964.

Cooper was born in London, England. She died from pneumonia at age eighty-two.

All content from Kiddle encyclopedia articles (including the article images and facts) can be freely used under Attribution-ShareAlike license, unless stated otherwise. Cite this article:
Gladys Cooper Facts for Kids. Kiddle Encyclopedia.