Glendora is a village in Tallahatchie County, Mississippi. The population was 285 at the 2000 census.

Glendora was developed by European Americans as a small sawmill site. Logs were floated down the river from around the vicinity of Webb to be processed here.

The first settlement developed two miles south of Glendora at Black Bayou. When the railroad was built through the territory in 1883, a station was located there and called Glendora. The town immediately grew. A post office was established in 1900 and a voting precinct was established.

Cane Lake Lumber Company built a large sawmill here which operated until 1909. It was moved to another site.

In 1955, Elmer Kimbrell, a white man, shot and killed Clinton Melton, an African-American resident, in front of three witnesses after an argument about how much gas Melton had pumped into Kimbrell's car. Kimbrell was acquitted by an all-white jury after a short trial. At this time, most blacks in Mississippi were still disenfranchised due to state barriers; they were not part of the jury pool because they were not registered voters and they were excluded from the political system.

According to the United States Census Bureau, the village has a total area of 0.1 square miles (0.26 km2), all land. 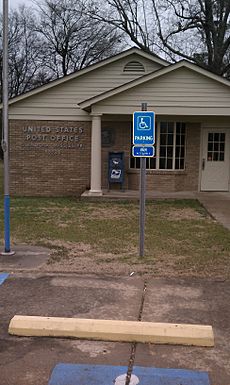 There were 69 households, of which 55.1% had children under the age of 18 living with them, 29.0% were married couples living together, 50.7% had a female householder with no husband present, and 11.6% were non-families. 8.7% of all households were made up of individuals, and 2.9% had someone living alone who was 65 years of age or older. The average household size was 4.13 and the average family size was 4.26.

All content from Kiddle encyclopedia articles (including the article images and facts) can be freely used under Attribution-ShareAlike license, unless stated otherwise. Cite this article:
Glendora, Mississippi Facts for Kids. Kiddle Encyclopedia.