(not to be confused with Glenelg, South Australia) 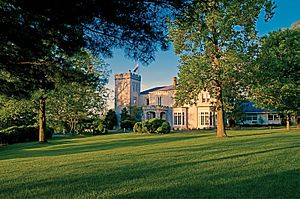 Glenelg is an unincorporated community in Howard County, Maryland, United States. It is in the 21737 zip code, and the 410 area code. It is the home town of Glenelg High School and Glenelg Country School. Although quite rural, it is a high-income area.

John Dorsey, who was one of the first settlers in what is now Howard County and a prominent man, gave land to his daughter Sarah Dorsey Howard and her husband Henry Howard out in the western part of the county (which is now Glenelg) in 1735. The property was called Howard's Resolution. On this land, Ephraim Howard, son of Sara and Henry, built a house on the property in the middle or late 18th century. In 1884, an additional section was added on to the front of the house. The newer front section was built by General Joseph Tyson, Assistant Postmaster General under President John Tyler. General and Mrs. Tyson called their home "Glenelg" after an old estate in Scotland and "because it spelled the same from either end" — in other words, a palindrome. Although historically not a true manor house, what is today known as "Glenelg Manor" forms the nucleus of a sprawling structure, which houses the Glenelg Country School elementary division.

Discovery Farm was built land patented as "Second Discovery" in 1729. A house was built starting with a kitchen in 1760 with nearby slave quarters. Folly Quarter road was once one of the "Rolling roads" that slaves would roll hogsheads of tobacco toward Elkridge Landing for sale.

A postal village named Glenelg was put in operation on February 6, 1856. The post office served the community out of Browns General store for 133 years until moved into the Ten Oaks shopping center in 1983. By 1878 population increased to 75, with land values ranging from $10 to $30 an acre. In 1915, a Typhoid fever epidemic struck 20 residents, with four deaths.

The yearbook of Glenelg High School is entitled Palindrome, with "Glenelg" being noted above as a palindrome.

All content from Kiddle encyclopedia articles (including the article images and facts) can be freely used under Attribution-ShareAlike license, unless stated otherwise. Cite this article:
Glenelg, Maryland Facts for Kids. Kiddle Encyclopedia.