Kids Encyclopedia Facts
(Redirected from Golden Books)
"Golden Books" redirects here. For other uses, see Golden Book.
This page is about the company Western Publishing. For publishing in the western world, see publishing.

With licenses for characters from Walt Disney Productions, Warner Bros., Metro-Goldwyn-Mayer, Edgar Rice Burroughs and Walter Lantz Studio, Western produced comics based on these characters, as well as original works. The editorial staff at the West Coast office over the years included: Eleanor Packer, Alice Cobb, Chase Craig, Zetta Devoe, Del Connell and Bill Spicer. Bernie Zuber was an editorial artist, a position similar to that of a production artist, from 1957 until 1982. Oskar Lebeck, Matt Murphy and Wally Green are among those who oversaw the East Coast office.

From 1938 to 1962, Western's properties were published under a partnership with Dell Comics, which also handled the distribution and financing of the comic books. In 1962, Western ended this partnership and published comics itself, establishing the imprint Gold Key Comics. As Murphy explained the split:

This imprint continued until the late 1970s, after which newsstand distribution was discontinued in favor of distribution to toy stores under the "Whitman Comics" banner. The company stopped publishing comics in 1984, and all of its licenses have since gone to other publishers. Many of these new licensees have included among their offerings reprints of stories originally published by Western.

Prior to 1962, in addition to comics published through Dell, Western published some comics under its own name, particularly giveaways such as March of Comics and the annual kite safety title (which featured an array of licensed characters) published over a span of 32 years for power utility companies. Both series had print runs in the hundreds of thousands.

In the 1990s, the Western/Gold Key characters Magnus, Turok and Dr. Solar were licensed to Valiant Comics, who published modified versions of the characters to great success. However, by the mid-1990s, Valiant's sales had slumped due to the decade's speculative boom collapsing, and the company ceased publishing in 1999.

In 2004, Dark Horse Comics began reprinting some of Western's original comic book properties, which by then were owned by Random House, along with Tarzan from the Jesse Marsh era. In 2009, the company announced plans to launch new versions of various Gold Key characters, with former Valiant editor-in-chief Jim Shooter as head writer. 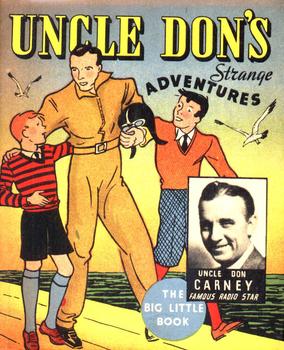 Uncle Don's Strange Adventures, a 1936 Big Little Book, featured a story about radio host Uncle Don and his adventures with a mystery cruiser.

Beginning in the 1920s and 1930s, Western published a wide range of children's books (puzzle books, coloring books, Tell-a-Tale books, Big Little Books), mostly under the Golden Books and Whitman Publishing brand names. The Little Golden Books was a very popular series. Lucille Ogle helped develop the format for these low-priced books, which told simple stories and were among the first children's books with full-color illustrations. The first was published in 1942. Beginning as the "Whitman Famous Classics", and later renamed the "Golden Press" imprint, Western published a series of (public domain) classics, such as Little Women, Little Men, Black Beauty and Heidi.

In the late 1960s, Golden Books were bound in the Goldencraft reinforced library bindings and sold to schools and libraries in the United States by a group of independent sales representatives. The library bound books were very popular with the schools and libraries. Offices were set up in Wayne, New Jersey, and the reinforced library books were warehoused in Wayne and distributed from that location. There were about 80 sales representatives in the United States under the general manager, Roy Spahr.

From the 1940s to the 1980s, Western published several series of books for older children and young teenagers, initially under its Whitman line. Girls' mystery series included Trixie Belden, Ginny Gordon, Donna Parker, Meg Duncan and Trudy Phillips. Boys' series included the Walton Boys, Power Boys, Brains Benton, and Troy Nesbit mysteries. The series, published from the 1950s to the 1970s, also included a number of titles licensed from popular movies and television shows: Lassie, The Adventures of Rin Tin Tin, many television Westerns, and Walt Disney's Spin and Marty and Annette (from the serial featuring Annette Funicello that aired on The Mickey Mouse Club. The company was also the original American publisher of The Adventures of Tintin, issuing six titles in English translation in 1959 and 1960, before discontinuing further releases because of what were considered disappointing sales.

In 1937, Western, at the request of Kay Kamen (who oversaw licensing and marketing at Disney), assumed production of the newsstand version of Mickey Mouse Magazine, which, in October 1940, was succeeded by the comic book Walt Disney's Comics and Stories. 1936-1954 Story Parade, Inc. (a Western subsidiary) published Story Parade: A Magazine for Boys and Girls with a children's literature orientation. Then in late 1955, Western initiated Walt Disney's Mickey Mouse Club Magazine with content produced by Disney Studio staff members. It was intended to promote The Mickey Mouse Club television series. Eventually the name was changed to Walt Disney's Magazine and the focus shifted to contemporary Disney movie and television productions. In a similar vein, they printed Gulf Oil's Wonderful World of Disney premium (1969-1970) which was edited by Disney's George Sherman. During the 1960s, Western published The Golden Magazine for Boys and Girls with Cracky the Parrot as its mascot.

For many years Golden Press was publisher of Betty Crocker cookbooks. Often these were issued in a three-ring binder format so recipe pages could be removed for easy consultation while cooking. Western produced games such as Trivial Pursuit and Pictionary until Hasbro bought that division in 1994. The company published the children's science books The World of Science and The Golden Book of Chemistry Experiments, while the Golden Guide nature guides were published with the Golden Press name.

Western Publishing Company Inc. owned dozens of trademarks over the years, many of which have now expired. A sampling of Western's trademarks follows. Some like "Golden" for example were registered multiple times for different uses (separated by "/"). Refer to the website cited for a complete listing of all trademarks.

All content from Kiddle encyclopedia articles (including the article images and facts) can be freely used under Attribution-ShareAlike license, unless stated otherwise. Cite this article:
Western Publishing Facts for Kids. Kiddle Encyclopedia.