The golden oriole (Oriolus oriolus or Eurasian golden oriole) is the only oriole breeding in northern hemisphere temperate regions.

It is one of the oriole family of passerine birds. It is a summer migrant in Europe and western Asia and spends the winter season in central and southern Africa.

The male is striking in the typical oriole black and yellow plumage, but the female is a drabber green bird. Orioles are shy, and even the male is remarkably difficult to see in the dappled yellow and green leaves of the canopy. In flight they look somewhat like a thrush, strong and direct with some shallow dips over longer distances. The New World orioles are similar in appearance to the Oriolidae, but are icterids and unrelated to the Old World birds.

The male of the Indian golden oriole (Oriolus ) has the black eye-stripe extending behind the eye, has a longer and paler red bill and has more yellow in the plumage.

Their call is a screech like a jay, but the song is a beautiful fluting weela-wee-ooo or or-iii-ole, unmistakable once heard.

The breeding range of this species spans from western Europe and Scandinavia east to China. They winter in central and southern Africa. They generally migrate during the night, but may travel during the day in the spring migration. During the autumn migration they migrate via the Eastern Mediterranean where they feed on fruit; they are often considered a pest in this region because of this.

The Eurasian golden oriole inhabits a range of habitats. In Western Europe they prefer open broadleaf forests and plantations, copses, riverine forest, orchards, large gardens; in Eastern Europe they may inhabit more continuous forest as well as mixed or coniferous forests. They generally avoid treeless habitats but may forage there. In their wintering habitat they are found in semi-arid to humid woodland, tall forests, riverine forest, woodland/savanna mosaic and savanna. 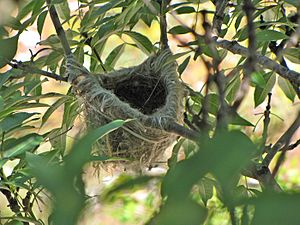 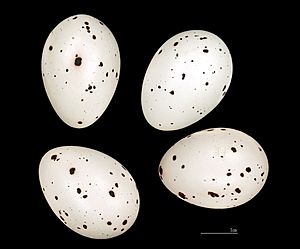 Eurasian golden orioles may delay breeding until they are 2 or 3 years of age. Males usually arrive at breeding area several days before the females. The nest is placed high in a tree towards the edge of the crown. The deep cup-shaped nest is suspended below a horizontal fork of thin branches. It is built by the female, but the male will sometimes gather some of the material. The nest is held in place by plant fibres up to 40 cm (16 in) in length and lined with fine grass, feathers and wool. The clutch is usually between 3 and 5 eggs. These are laid at daily intervals early in the morning. The eggs are on average 30.4 mm × 21.3 mm (1.20 in × 0.84 in) with a calculated weight of 7.3 g (0.26 oz). They can be white, cream or very pale pink and are decorated with black marks which are sometimes concentrated at the larger end. The eggs are mainly incubated by the female but the male will incubate for short periods to allow the female to feed. The eggs hatch after 16–17 days. The young are fed by both parents but are mostly brooded by the female. The young fledge after 16–17 days. The clutch is only rarely lost to predators as the parents vigorously defend their nest.

The greatest recorded age for a Eurasian golden oriole is 10 years and 1 month for a male that was ringed in Lincolnshire in 1986 and seen alive in Cambridgeshire in 1996.

They feed on insects and fruit, using their bills to pick insects out of crevices.

All content from Kiddle encyclopedia articles (including the article images and facts) can be freely used under Attribution-ShareAlike license, unless stated otherwise. Cite this article:
Golden oriole Facts for Kids. Kiddle Encyclopedia.