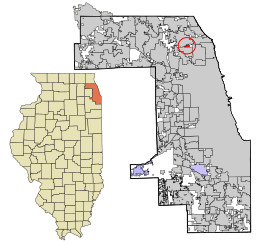 Location in Cook County and the state of Illinois.

Golf is a village in Cook County, Illinois, United States, incorporated in 1928. As of the 2010 census, the village had a population of 500. The community is primarily residential, and has a dedicated police department, post office, and Metra train stop.

The village of Golf occupies approximately half a square mile in Cook County, Illinois, roughly 17 miles (27 km) northwest of the Loop.

The land which is now the village was originally granted to the Chippewa, Ottawa, and Potawatomi peoples on August 19, 1825, at the First Treaty of Prairie du Chien.

Around 1830, John Dewes purchased 400 acres (160 ha) for 50 cents an acre from Antoine Ouilmette and became the first non-Indian settler in what is now Golf. Dewes first built a log cabin, then in 1834 he built a brick house - a mansion at the time. Both structures remain on the grounds of what is now the Glen View Club.

In 1897, the Glen View Club bought a portion of the Dewes land and built an 18-hole golf course.

Around 1899, one member, Albert J. Earling, President of the Chicago, Milwaukee and St. Paul Railroad, started taking his private rail car from his offices downtown to golf at the Glen View Golf Club. He would tell people he was "going to golf." Earling arranged to have his car switched to a special siding at what is now the Golf train station. Other members began using Earling's siding, and it soon became a regular stop known as the "Golf stop".

In 1925 Edward R. Diederich, a Chicago businessman, wanted to buy an acre of land near the Glen View Golf Club to build a country home. He found that in order to get the site he wanted, he would have to purchase a 30-acre (12 ha) tract that was being sold to close an estate. The 30 acres extended from the Golf train station to the Glen View Golf Club boundary. Diederich chose to purchase the land, and had it laid out with winding streets and big lots. He installed sewer, water, gas, and electricity, paved streets, sidewalks, and installed street lights. The village of Golf was incorporated in 1928.

There were 156 households, out of which 41.7% had children under the age of 18 living with them, 79.5% were headed by married couples living together, 0.6% had a female householder with no husband present, and 16.7% were non-families. 16.0% of all households were made up of individuals, and 9.0% were someone living alone who was 65 years of age or older. The average household size was 2.99, and the average family size was 3.38.

The Golf Civic Association plans five social activities for villagers each year. The events include a winter party, 4 July festivities and fireworks, a fall steak fry, a Halloween haunted house, and the Polar Express.

The Village of Golf is known for its rigid speed limits. All residential streets have a speed limit of 20 mph which is strictly enforced by the local police department. The officers also enforce the speed limit on Golf Road which is a major 4 lane roadway running through the Village. Despite its small size, the Village has a police officer on-duty 24 hours a day.

The Village of Golf remains one of the few villages in the country which does not have a postal delivery service. Golf residents are required to go to the local post office each day and pick up their mail from individual boxes, as opposed to the traditional delivery method that brings the mail to a box at each house individually. The Golf post office is closed Saturdays and Sundays.

All content from Kiddle encyclopedia articles (including the article images and facts) can be freely used under Attribution-ShareAlike license, unless stated otherwise. Cite this article:
Golf, Illinois Facts for Kids. Kiddle Encyclopedia.