Gordon Gould (July 17, 1920 – September 16, 2005) was an American physicist who is widely, but not universally, credited with the invention of the laser (Others attribute the invention to Theodore Maiman). Gould is best known for his thirty-year fight with the United States Patent and Trademark Office to obtain patents for the laser and related technologies. He also fought with laser manufacturers in court battles to enforce the patents he subsequently did obtain.

Born in New York City, Gould was the oldest of three sons. His father was the founding editor of Scholastic Magazine Publications in New York City. He grew up in Scarsdale, a small suburb of New York, and attended Scarsdale High School. He earned a Bachelor of Science degree in physics at Union College, where he became a member of the Sigma Chi Fraternity, and a master's degree at Yale University, specializing in optics and spectroscopy. Between March 1944 and January 1945 he worked on the Manhattan Project but was dismissed due to his activities as a member of the Communist Political Association. In 1949 Gould went to Columbia University to work on a doctorate in optical and microwave spectroscopy. His doctoral supervisor was Nobel laureate Polykarp Kusch, who guided Gould to develop expertise in the then-new technique of optical pumping. In 1956, Gould proposed using optical pumping to excite a maser, and discussed this idea with the maser's inventor Charles Townes, who was also a professor at Columbia and later won the 1964 Nobel prize for his work on the maser and the laser. Townes gave Gould advice on how to obtain a patent on his innovation, and agreed to act as a witness.

Invention of the laser

By 1957, many scientists including Townes were looking for a way to achieve maser-like amplification of visible light. In November of that year, Gould realized that one could make an appropriate optical resonator by using two mirrors in the form of a Fabry–Pérot interferometer. Unlike previously considered designs, this approach would produce a narrow, coherent, intense beam. Since the sides of the cavity did not need to be reflective, the gain medium could easily be optically pumped to achieve the necessary population inversion. Gould also considered pumping of the medium by atomic-level collisions, and anticipated many of the potential uses of such a device. 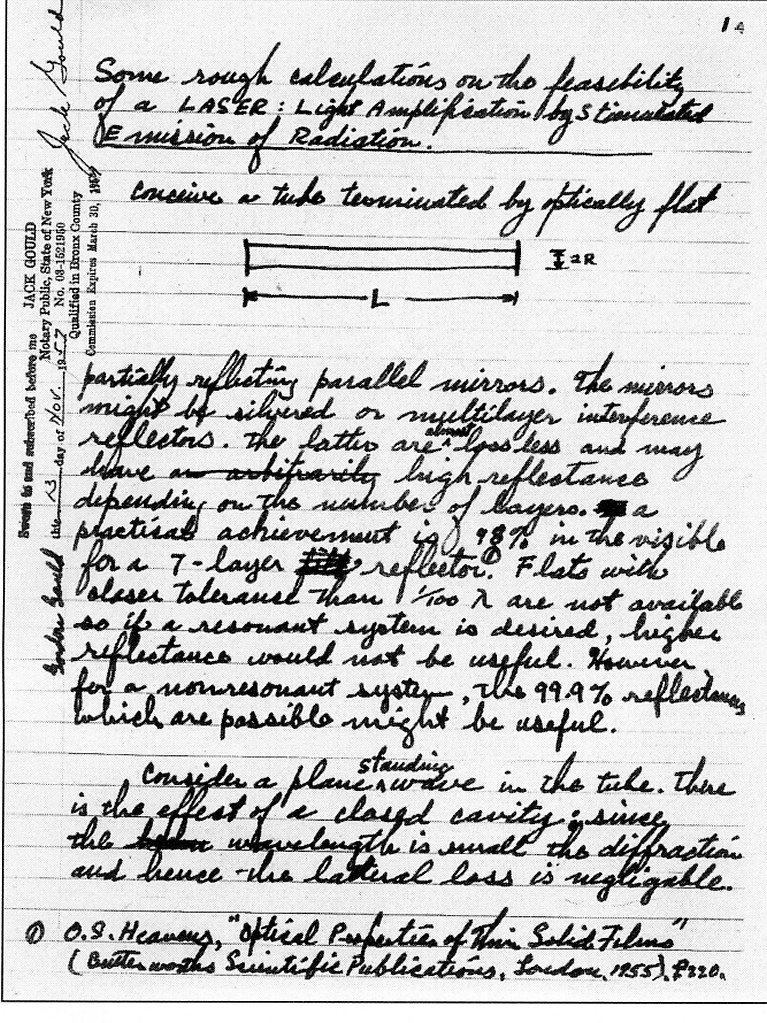 The first page of the notebook in which Gould coined the acronym LASER and described the essential elements for constructing one.

Gould recorded his analysis and suggested applications in a laboratory notebook under the heading "Some rough calculations on the feasibility of a LASER: Light Amplification by Stimulated Emission of Radiation"—the first recorded use of this acronym. Gould's notebook was the first written prescription for making a viable laser and, realizing what he had in hand, he took it to a neighborhood store to have his work notarized. Arthur Schawlow and Charles Townes independently discovered the importance of the Fabry–Pérot cavity—about three months later—and called the resulting proposed device an "optical maser". Gould's name for the device was first introduced to the public in a conference presentation in 1959, and was adopted despite resistance from Schawlow and his colleagues.

Eager to achieve a patent on his invention, and believing incorrectly that he needed to build a working laser to do this, Gould left Columbia without completing his doctoral degree and joined a private research company, TRG (Technical Research Group). He convinced his new employer to support his research, and they obtained funding for the project from the Advanced Research Projects Agency, ironically with support from Charles Townes. Unfortunately for Gould, the government declared the project classified, which meant that a security clearance was required to work on it. Because of his former participation in communist activities, Gould was unable to obtain a clearance. He continued to work at TRG, but was unable to contribute directly to the project to realize his ideas. Due to technical difficulties and perhaps Gould's inability to participate, TRG was beaten in the race to build the first working laser by Theodore Maiman at Hughes Research Laboratories.

Election to Hall of Fame and death

Even though his role in the actual invention of the laser was disputed over decades, Gould was elected to the National Inventors Hall of Fame in 1991.

Gould died of natural causes on September 16, 2005. At the time of his death, Gould's role in the actual invention continued to be disputed in scientific circles. Apart from the dispute, Gould had realized his hope to "be around" when the Brewster's angle window patent expired in May 2005.

All content from Kiddle encyclopedia articles (including the article images and facts) can be freely used under Attribution-ShareAlike license, unless stated otherwise. Cite this article:
Gordon Gould Facts for Kids. Kiddle Encyclopedia.