Government of Michigan facts for kids 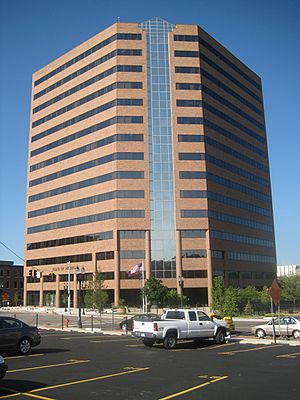 The Grand Tower in Lansing

The two other elected constitutional executives of the state are the secretary of state and attorney general. Both are elected for separately four year terms concurrently with the governor/lieutenant governor slate. The elected officeholders are second and third in the line of succession respectively and may act as governor during disabilities or absences from the state. The attorney general is the state’s chief law enforcement officer, executive agencies legal counsel and leads the Department of the Attorney General. The secretary of state and its department handles automobile-related licensing, elections and record holding.

Type 1 agencies are under the under administration of the agency but operates independently of the principal department in caring out its function and in most cases created by a type 1 transfer. Regulations are published in the Michigan Register (MR) and codified in the Michigan Administrative Code (MAC or AC).

The state board of Education is a statewide elected board that head the Michigan Department of Education which oversees all education except that of the state universities.

Michigan's state universities are immune from control by the legislature, many aspects of the executive branch, and cities in which they are located; but they are not immune from the authority of the courts. Some degree of political control is exercised as the legislature approves appropriations for the schools. Furthermore, the governor appoints the board of control of most state universities with the advice and consent of the state Senate. Only the board members of the University of Michigan, Michigan State University, and Wayne State University are chosen in general elections.

All content from Kiddle encyclopedia articles (including the article images and facts) can be freely used under Attribution-ShareAlike license, unless stated otherwise. Cite this article:
Government of Michigan Facts for Kids. Kiddle Encyclopedia.