Government of Detroit facts for kids 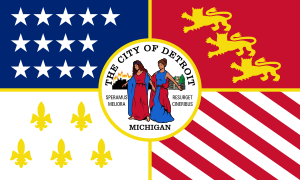 The Flag of Detroit.

With a charter adopted on July 1, 1974, the government of Detroit, Michigan, is run by a mayor, the nine-member Detroit City Council, and clerk elected on a nonpartisan ballot. Detroit has a "strong mayoral" system, with the mayor approving departmental appointments. The council approves budgets, but the mayor is not obligated to adhere to any earmarking. The city clerk supervises elections and is formally charged with the maintenance of municipal records. City ordinances and substantially large contracts must be approved by the council. Municipal elections for mayor, city council and city clerk are held in years following presidential elections (such as 1993, 1997, 2001, 2005, 2009, and 2013). 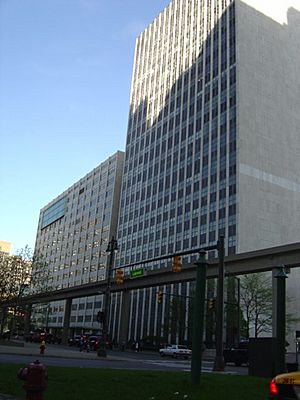 The Coleman A. Young Municipal Center.

In addition to property tax, the city levies an income tax of 2.65% on residents, 1.325% on non-residents, and 1.6% on corporations. Revenue is also obtained from utility taxes, hotel excises and from the Detroit-owned Water and Sewer system that provides most of the fresh water and sewage treatment facilities within the metropolitan area. Detroit has had to fight off legislative efforts to turn control of the system to the suburbs.

The city has experienced some fiscal years of balanced budgets in the new millennium with new growth in business and tourism. The city has planned a reduced workforce and more consolidated operations. In addition, Detroit had asked for pay cuts and other "give backs" from the municipal unions that represent city employees.

All content from Kiddle encyclopedia articles (including the article images and facts) can be freely used under Attribution-ShareAlike license, unless stated otherwise. Cite this article:
Government of Detroit Facts for Kids. Kiddle Encyclopedia.