Government of Texas facts for kids

The government of Texas operates under the Constitution of Texas and consists of a unitary democratic state government that uses the Dillon Rule, as well as governments at the county and municipal levels.

Austin is the capital of Texas. The State Capitol resembles the United States Capitol in Washington, D.C., but is faced in Texas pink granite and is topped by a statue of the "Goddess of Liberty" holding aloft a five-point Texas star. The capitol is also notable for purposely being built seven feet taller than the U.S. national capitol.

The executive branch consists of the Governor, Lieutenant Governor, Comptroller of Public Accounts, Land Commissioner, Attorney General, Agriculture Commissioner, the three-member Texas Railroad Commission, the State Board of Education, and the Secretary of State. Texas has a plural executive branch system which limits the power of the Governor. Except for the Secretary of State, all executive officers are elected independently making them directly answerable to the public, not the Governor.

Partly because of many elected officials, the governor's powers are quite limited in comparison to other state governors or the U.S. President. In popular lore and belief the lieutenant governor, who heads the Senate and appoints its committees, has more power than the governor. The governor commands the state militia and can veto bills passed by the Legislature and call special sessions of the Legislature (this power is exclusive to the governor and can be exercised as often as desired). The governor also appoints members of various executive boards and fills judicial vacancies between elections. All members of the executive branch are elected statewide except for the Secretary of State (appointed) and the State Board of Education (each of its 15 members are elected from single-member districts). 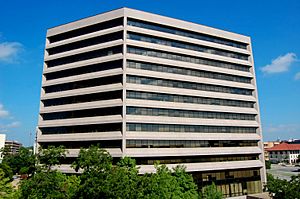 The William B. Travis State Office Building in Downtown Austin

The executive branch also includes several boards and commissions that are constituted through a mixture of elections and gubernatorial appointments confirmed by the Senate. Even with the Governor appointing several members of boards and commissions, the overall effect is a sprawling network of administrative bodies that neither the Governor nor the Legislature are able to coordinate or completely control. The Governor appoints the directors of a handful of state agencies, and the Governor exercises direct authority over these offices. Most state agencies are headquartered in Austin.

All content from Kiddle encyclopedia articles (including the article images and facts) can be freely used under Attribution-ShareAlike license, unless stated otherwise. Cite this article:
Government of Texas Facts for Kids. Kiddle Encyclopedia.