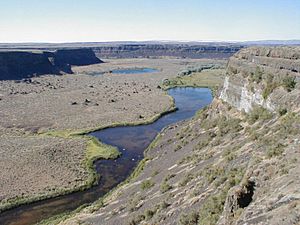 The Grand Coulee used to be a river in the U.S. state of Washington. This dry river stretches for sixty miles from the Grand Coulee Dam to Soap Lake. A feature known as Dry Falls divides the Coulee into two parts. Dry Falls is thought to be the remains of the largest waterfall ever, two or three times higher than Niagara Falls.

The Grand Coulee is granite bedrock which is 40 to 60  million years old. The volcanic basalt is 2,000 metres (6,600 ft) thick. The coulee is said to have been made when the Columbia River was blocked by a large glacier. At the end of the last ice age the Columbia River went back to its old route and left the coulee. The coulee is a mile wide and was formed by a river that now flows a different way. 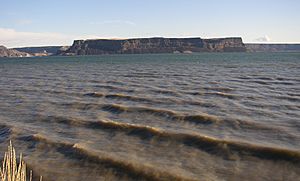 The area surrounding the Grand Coulee is shrub land. It has a rainfall of twelve inches per year. The Lower Grand Coulee contains the Park, Blue, Alkali, Lenore, and Soap lakes. Until recently, the Upper Coulee was dry.

All content from Kiddle encyclopedia articles (including the article images and facts) can be freely used under Attribution-ShareAlike license, unless stated otherwise. Cite this article:
Grand Coulee Facts for Kids. Kiddle Encyclopedia.