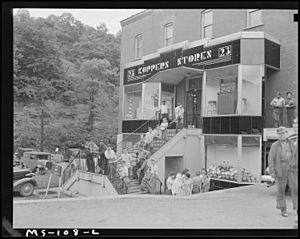 Grant Town is a town in Marion County, West Virginia, in the eastern United States. The population was 613 at the 2010 census.

The town was formed in 1901 with the opening of the Federal Coal and Coke Company bituminous coal mine, and was named for Robert Grant, vice president of the coal company. The "Federal No. 1" mine remained open for the next 84 years until its closure in 1985. At one point it was the largest underground coal mine in the world in terms of gross production, mining the Pittsburgh coal seam. The town was incorporated as a municipality in 1946.

Grant Town is the site of an 80 Megawatt electrical generation facility, located adjacent to the coal refuse areas above the town. The plant, which was built in the early 1990s is controlled by Edison International and generates electricity using a fluidized bed combustion boiler process burning waste coal.

The town is home to a local legend of a Bigfoot-type creature, sighted periodically by local residents since the early 1970s. The creature, known locally as the "Grant Town Goon", is reported to live in the woods and coal waste areas to the southern and southwestern parts of the town. Grant Town is also the location of a number of the stories of the West Virginia ghost story anthology The Telltale Lilac Bush, by Fairmont State University professor Ruth Ann Musick. The town, the mine and surrounding farms are prominently featured in a number of the stories. Musick includes a description of the town, circa 1965, in an introduction to a section on mine ghost stories:

"The Grant Town Mine, the scene of four of the stories here, is one of the largest in the United States, and possibly in the world. The town itself, with a population of a little over a thousand, is about seven miles northwest of Fairmont. Surrounded by hills, it is a kind of a sunken garden--a well at the bottom of the stairway of hills and highways--so that it seems to be in a world of its own. In a way, perhaps, it is. At least fourteen different European nationalities live in the town and work in the mine."

There were 260 households, of which 27.7% had children under the age of 18 living with them, 49.2% were married couples living together, 10.8% had a female householder with no husband present, 5.8% had a male householder with no wife present, and 34.2% were non-families. 29.6% of all households were made up of individuals, and 15% had someone living alone who was 65 years of age or older. The average household size was 2.36 and the average family size was 2.88.

All content from Kiddle encyclopedia articles (including the article images and facts) can be freely used under Attribution-ShareAlike license, unless stated otherwise. Cite this article:
Grant Town, West Virginia Facts for Kids. Kiddle Encyclopedia.