Gravel Run is a tributary of the Susquehanna River in Northumberland County, Pennsylvania, in the United States. It is approximately 4.4 miles (7.1 km) long and flows through Rush Township and Upper Augusta Township. The watershed of the stream has an area of 6.33 square miles (16.4 km2). A number of bridges cross the stream and a mill was also historically present along it. The stream is considered to be a Coldwater Fishery and a Migratory Fishery. It has a number of unnamed tributaries. 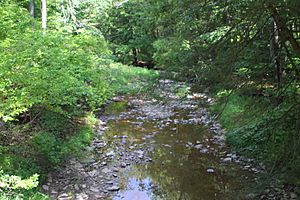 Gravel Run begins on a hill in southern Rush Township. It flows west for a few hundred feet and then turns southwest for a similar distance before turning west again. The stream then turns roughly to the north for more than a mile, flowing parallel to Pine Swamp Road for most of the distance and receiving an unnamed tributary. Its valley deepens in this area. The stream then reaches Klines Grove, where it receives another unnamed tributary and turns northeast, flowing along the border between Rush Township and Upper Augusta Township. After a few hundred feet, it makes an abrupt turn west before turning north-northwest. The stream's valley continues to deepen and after approximately a mile, the stream turns west and slightly south before gradually turning northwest and reaching Wolverton. In Wolverton, the stream reaches its confluence with the Susquehanna River.

Gravel Run forms a portion of the border between Rush Township and Upper Augusta Township.

The watershed of Gravel Run has an area of 6.33 square miles (16.4 km2). Both the mouth and the headwaters of the stream are in the United States Geological Survey quadrangle of Riverside. The stream is one of the main streams in Northumberland County.

Bassett Campground is located near Gravel Run, in the stream's left floodway.

As of August 31, 2011, the wild trout designation for Gravel Run is being considered. It has been proposed that the stream be designated as a stream with naturally reproducing trout. The stream's Chapter 93 Classification is considered to be a Coldwater Fishery and a Migratory Fishery throughout its drainage basin.

All content from Kiddle encyclopedia articles (including the article images and facts) can be freely used under Attribution-ShareAlike license, unless stated otherwise. Cite this article:
Gravel Run (Susquehanna River tributary) Facts for Kids. Kiddle Encyclopedia.