The Great-billed Heron (Ardea sumatrana) is a wading bird of the heron family Ardeidae, resident from southeast Asia to Papua New Guinea and Australia.

It feeds in shallow water, spearing fish with its long, sharp bill. It will wait motionless for prey, or slowly stalk its victim. 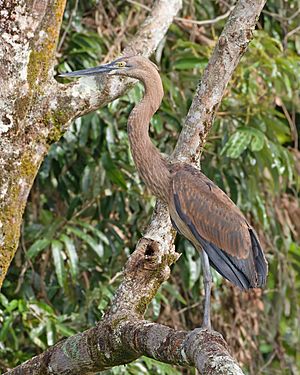 The great-billed heron is a large bird, typically standing 115 cm (45 in) tall and weighing up to 2.6 kg (5.7 lb). It is larger than the purple heron, which it resembles in appearance, although it is larger and darker. The plumage is largely dark grey above. In flight, it has a uniform dark grey upperwing.

The flight is slow, with its neck retracted. This is characteristic of herons and bitterns, and distinguishes them from storks, cranes and spoonbills, which extend their necks. The species feeds in shallow water, spearing fish with its long, sharp bill. It will wait motionless for prey, or slowly stalk its victim.

The great-billed heron has a very large range, occurring in much of coastal Southern Asia and Australasia including Australia, India, Indonesia, Malaysia, and the Philippines. Its habitats are largely coastal such as islands, coral reefs, mangroves, large rivers. However, occasionally, it can be found inland in shallow ponds.

All content from Kiddle encyclopedia articles (including the article images and facts) can be freely used under Attribution-ShareAlike license, unless stated otherwise. Cite this article:
Great-billed Heron Facts for Kids. Kiddle Encyclopedia.