Great Kills is a neighborhood within the borough of Staten Island in New York City. It is located on the island's South Shore, and according to many local geographers, it is the South Shore's northernmost community. It is bordered by Richmondtown to the north, Bay Terrace to the east, Eltingville to the west, and Great Kills Harbor to the south.

Kill is an archaic Dutch word with various popular translations, including "creek" and "channel". Indeed, many small streams dot the neighborhood, and the name can be interpreted as meaning that a great number of such streams can be found there.

Great Kills is part of Staten Island Community District 3, and its ZIP Codes are 10308 and a small part of 10306. The neighborhood is patrolled by the 122nd Precinct of the New York City Police Department.

The eastern half of what has been known since 1865 as Great Kills was originally named Cairedon, and the western half was named Newtown. Both later came to be known as Giffords, after Daniel Gifford, a local commissioner and surveyor. The name survives in Giffords Lane, which is located at the Staten Island Railway station, which was also formerly named Giffords and in Giffords Glen, which also near the train station. Another name associated with the neighborhood is Honeywood, which survived as the name of the telephone exchange for many South Shore communities through the late 1950s.

The Poillon-Seguine-Britton House was listed on the National Register of Historic Places in 1984.

This neighborhood is home to Great Kills Little League, one of the 8 little leagues on Staten Island. Actor Rick Schroder lived in the community as a child, as did actress Alyssa Milano, comedian Bob Levy and new ESPN anchor Joe Engle.

At the southeastern corner of the neighborhood is Great Kills Park, a national park site that is part of Gateway National Recreation Area. The park includes a beach, marina, trails, fishing and bird-watching areas and sports fields.

Myra S. Barnes I.S. 24 was named after an educator and civic activist, also known as "The Fighting Lady of New Dorp." Ms. Barnes was well known for her contributions to the New York City Council. 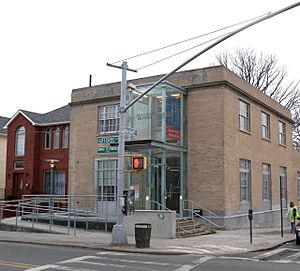 Great Kills is served by the Staten Island Railway and numerous local and express buses. The railway serves the neighborhood via the Great Kills station, located at Giffords Lane near Amboy Road. Express train service between Great Kills and the St. George Ferry Terminal is maintained during the morning and evening weekday rush hours, while local trains serve the station 24/7. Local buses are the S54, S74, S78, S79, S84, and Manhattan express buses are the SIM1, SIM5, SIM6, SIM7, SIM9, SIM10. Parallel to Amboy Road, the neighborhood's other major commercial streets are Arthur Kill Road and Hylan Boulevard.

The entirety of Community District 3, which comprises Great Kills and other South Shore neighborhoods, had 159,132 inhabitants as of NYC Health's 2018 Community Health Profile, with an average life expectancy of 81.3 years at birth. This is about the same as the life expectancy of 81.2 for all New York City neighborhoods. Most inhabitants are youth and middle-aged adults: 21% are between the ages of 0 and 17, 26% between 25 and 44, and 29% between 45 and 64. The ratio of college-aged and elderly residents was lower, at 8% and 16% respectively.

As of 2017, the median household income in Community District 3 was $96,796. In 2018, an estimated 11% of South Shore residents lived in poverty, compared to 17% in all of Staten Island and 20% in all of New York City. On average during 2012–2016, one in sixteen South Shore residents (6%) were unemployed, compared to 6% in Staten Island and 9% in New York City. Rent burden, or the percentage of renters who paid more than 30% of their income for housing, was 42% for the South Shore, compared to the boroughwide and citywide rates of 49% and 51%, respectively. As of 2018[update], Great Kills and the South Shore were considered middle- to high-income relative to the rest of the city, and not gentrifying. 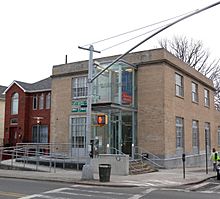 Barnes I.S. 24 in Great Kills is one of Staten Island's public intermediate schools (grades 6–8), named for the local educator and civic activist Myra S. Barnes (1880–1962). Dubbed the "Fighting Lady", she was well known for highlighting Staten Island issues to the New York City government. Firefighter Scott Davidson, lost in the September 11 attacks of 2001, attended I.S. 24, and is one of 29 local victims memorialized by an eternal flame at St. Clare's, the neighborhood's prominent Catholic church and parochial school.

In 2009, The New York Times reported: "The three public schools in Great Kills, two of them elementary schools [P.S. 8 and P.S. 32], are among the best in the city." In 2008, Today's Catholic Teacher magazine selected St. Clare's School as one of twelve nationwide to receive the "Catholic Schools for Tomorrow Award".

The New York Public Library (NYPL) operates two locations nearby. The Great Kills branch is located at 56 Giffords Lane. The branch was opened in 1927 as a one-story building and was replaced by the current three-story building in 1954. Fully renovated in 2005, it currently has a lower level for community events, a first floor for adults, and a second floor for children's collections.

The Richmondtown branch is located at 200 Clarke Avenue, just outside Great Kills. It opened in 1996 and contains two floors: a first floor for adults and a second floor for children. 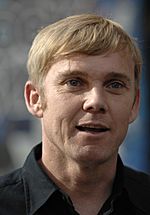 People who were born in, residents of, or otherwise closely associated with Great Kills include:

All content from Kiddle encyclopedia articles (including the article images and facts) can be freely used under Attribution-ShareAlike license, unless stated otherwise. Cite this article:
Great Kills, Staten Island Facts for Kids. Kiddle Encyclopedia.