The Greater Sudbury Museums are a network of four small community history museums in Greater Sudbury, Ontario, Canada. Three of the four are located on heritage properties in different neighbourhoods within the city, and the fourth is located in a library facility.

The Copper Cliff Museum (46°28′25″N 81°04′01″W﻿ / ﻿46.4737°N 81.0670°W﻿ / 46.4737; -81.0670﻿ (Copper Cliff Museum)) on Balsam Street in Copper Cliff is housed in a log cabin on the site of the very first homestead in the community. The log cabin is not the original structure on that property, however, but was moved there in 1972. The museum is set up to depict the lifestyle of a miner's family in the area. The museum also has the baseball jacket of Thelma Jo Walmsley, a Copper Cliff native who played on the Racine Belles' 1946 All-American Girls Professional Baseball League championship team. An Ontario Historical Plaque was erected by the province to commemorate the Mine Rescue Stations's role in Ontario's heritage. 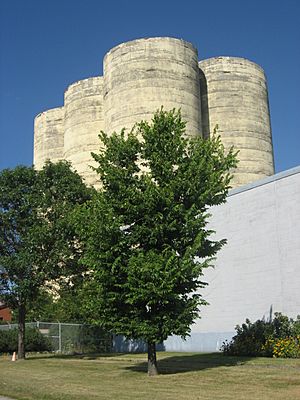 The Flour Mill Museum (Musée du Moulin-à-Fleur) (46°30′24″N 80°59′15″W﻿ / ﻿46.5067°N 80.9876°W﻿ / 46.5067; -80.9876﻿ (Flour Mill Museum)) was initially located on Notre-Dame Avenue beside the Flour Mill Silos in the city's historic Flour Mill neighbourhood. It was later moved in the 1980s to its present location on St. Charles Street. The historic building was originally the home of François Varieur, the foreman of an early lumber mill in the Sudbury area. It was later acquired by the Manitoba and Ontario Flour Mill Company, to serve as the home of the community's flour mill foreman.

The museum was opened in 1974, and is devoted particularly to the life and history of the Franco-Ontarian community in the Flour Mill area.

In 2015 the museums' undertook a re-branding project. This involved employing a local graphic design firm (Design de Plume) to create and design new logos for each heritage site and a main logo for the Greater Sudbury Museums.

The inspiration for the logos stems from the idea that Greater Sudbury is a patchwork community that combines cultural aspects from the nearby settlements of the area. The re-branding was centered around this concept, as well as their motto "cultural mosaic", to highlight each settlement's unique history as it comes together to form the Greater City of Sudbury. The cultural mosaic concept took inspiration from the unifying quilt by Mrs. Carolyn Wahamaa, who created imagery that "[symbolized] the harmony existing in the towns of Rayside-Balfour, Azilda and Chelmsford, as well as between Anglophone and Francophone residents, with each party maintaining its own identity".

The museums' website incorporates some video and photographic exhibits, as well as quite a bit of historical writing on the region and its distinct communities (in its Greater Sudbury Histories section).

In addition to the website, the museums offer a number of online resources, including:

All content from Kiddle encyclopedia articles (including the article images and facts) can be freely used under Attribution-ShareAlike license, unless stated otherwise. Cite this article:
Greater Sudbury Heritage Museums Facts for Kids. Kiddle Encyclopedia.