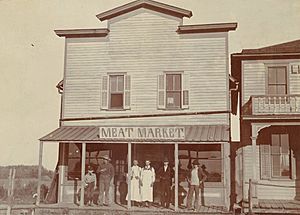 Gretna is a city in Sarpy County, Nebraska, United States. The population was 4,441 at the 2010 census.

Gretna started shortly after the Burlington Railroad built a short line between Omaha and Ashland in the summer of 1886. Advent of the village of Gretna on this new laid rail line was the cue for the exit of the nearby trading post of Forest City, which had existed since 1856. In its day, Forest City, located 2.5 miles southwest of where Gretna now stands, was a flourishing and busy place, but it was doomed by the rail road which passed it by. The only marker that exists today to show the site of old Forest City is the cemetery (Holy Sepulcher) which is located a little to the east of what was the center of activity in the settlement. Names that were prominent in the beginnings of Forest City were the families of William Langdon, John Thomas and John Conner.

The Lincoln Land Company, recognizing the potential of the site, surveyed and platted the town site of Gretna in 1887. The village was incorporated by July 10, 1889. The name suggests Scotland's Gretna Green, the ancestral county of some of the earliest settlers.

According to the United States Census Bureau, the city has a total area of 2.10 square miles (5.44 km2), all of it land.

The nearest hospitals are Lakeside Hospital (9.5 miles away), located in Omaha, or Midlands Hospital in Papillion (11.4 miles). Papillion is also the location of the county courthouse.

Gretna Public Schools has passed several bond issues to build new facilities. Gretna's school bonds have become the third highest bond levy tax burden for property owners in the state. Gretna has a bond levy of 0.33456, with only Bennington and Elkhorn ranking higher, each with a bond levy of .34.

All content from Kiddle encyclopedia articles (including the article images and facts) can be freely used under Attribution-ShareAlike license, unless stated otherwise. Cite this article:
Gretna, Nebraska Facts for Kids. Kiddle Encyclopedia.