Grover is a town in Cleveland County, North Carolina, United States. The population was 708 at the 2010 census.

Grover is classified as a small town where railway and highway routes Interstate 85 and U.S. Highway 29 cross the state line between North Carolina and South Carolina. It was previously named Whitaker and legally was in South Carolina. The name change to Grover was in honor of President Grover Cleveland. Gingerbread Row, (Cleveland Avenue - NC Highway 216) has an antique look with many restored homes.

A railroad-dominated town started when the Atlanta Charlotte Airline Railway placed a turntable for engines to be spun. They operated from the 1880s to the 1920s and Southern Railway (U.S.) continues to carry passengers to this day (now known as Norfolk Southern). Mail drops and pickups by train occurred several times per day in Grover. Amtrak also operates on the line (under permission) and carries passengers from Atlanta to Charlotte, Richmond and New York City. George W. Bush made a rail stop in Grover during his U.S. Presidential campaign.

Grover is also home to international companies like Eaton, Commercial Vehicle Group, Southern Power, Cunningham Brick and the Presidential Culinary Museum and Library. Hatcher Hughes previously lived in Grover and won the Pulitzer Prize in 1924 for his Broadway play, Hell-Bent Fer Heaven, a show about his own people from the area of the foothills - where Grover is located. He was a professor at the Ivy League college Columbia University. The Hambright (Hambrecht) family of Philadelphia and Prussia lives in Grover and built the tallest and largest mansion there in 1879 under the guidance of Doctor Alfred Frederick Hambright (Hambrecht). Grover also hosts a former White House Chef and manager of Camp David, Martin CJ Mongiello, who lives there.

Grover is a part of Cleveland County, North Carolina. The county is named after Colonel Benjamin Cleveland (Cleaveland - Thorkil de Cleveland of Cleveland County York, England in the year 1066) - of the King's Mountain battle - a companion of Colonel Frederick Hambright (with his son John by his side) during the Revolutionary War. Grover holds as many North Carolina Official Historical Markers as the county seat of Shelby. It was the town of entry by The Marquess, Lord Charles Cornwallis when he invaded North Carolina with his cavalry, artillery and army. The butcher of New Jersey, Major Patrick Ferguson, also camped near parts of present-day Grover, prior to battle on King's Mountain, a local mountain range named after the King Family that lived there. In 1887, the legislature voted to change the name of Grover's County - to the more utilized English word version of, "Cleveland", from its previous version of Cleaveland. President Grover Cleveland had been in office since 1885 (the first Democrat elected after the American Civil War). 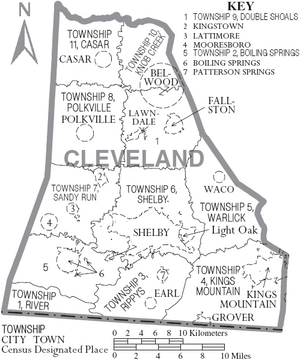 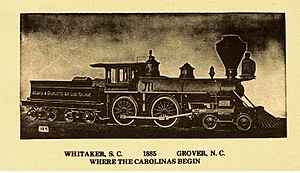 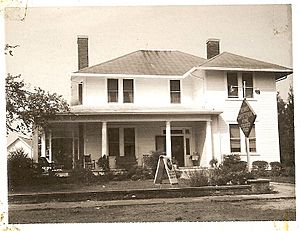 This portion of history affected local matters. A German bachelor, Grover Cleveland, was ill at ease at first with all the comforts of the White House. "I must go to dinner," he wrote to a friend, "but I wish it was to eat a pickled herring, a Swiss cheese, and a chop at Louis' instead of the French stuff I shall find." He gained advance publicity and coverage as did the town of Grover. A portion of the original plan encompassed renaming the town after the Presidents first name to attain notice. In June 1886, this predicament would be fixed for Grover. President Cleveland married 21-year-old Frances Folsom; he was the only President ever married in the White House. This historic event and the ensuing honeymoon took on news attention. The name change of Grover's county took on epic proportions shortly after this event. The town, White House and county historically affected each other in an unpredicted manner. In 1887, Cleaveland County held a referendum and vote to change its name to the more popular spelling of, "Cleveland". The latest, mistaken report of this (verified July, 2008) with a letter delivered by the US Postal Service, from the White House Historical Society to The Inn of the Patriots, 301 Cleveland Avenue, Grover Cleveland, NC 28073. No such town exists in America.

Cleveland Avenue (Route 226) runs through Grover - parallel to Main Street. Many Hambrights (Hambrechts), Hamricks and Herndons lived on Cleveland Avenue. Today, the Shiloh Presbyterian Church (built in 1905) remains next to Doctor Alfred Hambright's (Hambrecht) home that was built after the Civil War. A statue was dedicated to Colonel Frederick Hambright (Hambrecht Prussian family) and US Marine Corporal, Clyde Furman Horton on July 1, 2008. The Shiloh Presbyterian Church Cemetery was listed on the National Register of Historic Places in 2011.

Many other prominent names dominate the makeup of Grover and are listed repeatedly in reference level books of the Cleveland County Library System, families like Herndon, Hambright (Hambrecht), Hamrick, Rountree, Keeter, Graham, Cleaveland, Cleveland, Scruggs and Goforth. Within the history of Grover - it is often confused with President Grover Cleveland versus Benjamin Cleveland and where the names came from. Although, each Cleveland are related - going back to Amos Cleveland, of Massachusetts and Cleveland, Ohio.

Grover is in the process of restoring itself to a more picturesque town, of a turn-of-the-century look and feel. Its train and spinning engine turntable with history applied for such in a 2010 North Carolina Main Street program. The current mayor is Bill Willis. The town historian is Doctor Cobia Goforth.

There is one public elementary school, Grover Elementary, located in the town. Numerous, public, middle and high schools are located nearby in Kings Mountain, NC. Kings Mountain High School is the largest in the region and is listed as the 199th best high school in North Carolina.

All content from Kiddle encyclopedia articles (including the article images and facts) can be freely used under Attribution-ShareAlike license, unless stated otherwise. Cite this article:
Grover, North Carolina Facts for Kids. Kiddle Encyclopedia.