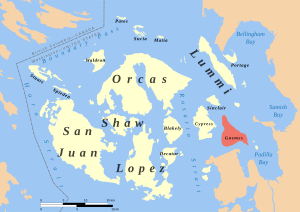 Guemes Island is a small island in western Skagit County, Washington, United States. It is located north of Fidalgo Island and the city of Anacortes, and is accessible by private boat and by the Guemes Island ferry operated by Skagit County.

Guemes Island was named after the Viceroy of New Spain, Juan Vicente de Güemes, who commissioned an expedition that revealed the islands to Spain in 1794.

Guemes Island has a rural character with limited facilities.

Two of the island’s beaches are private but most beach access is public, including multiple boat launches. There are also two parks: one in the middle of the island known as Schoolhouse Park, and the other, Young's Park, located on North Beach near The Guemes Island Resort.

The community located on Guemes Island is generally referred to as "Guemes".

Guemes Island was a traditional location for the Samish tribe's winter villages. Around 1873, the Samish, displaced due to government decisions, established a new village on Guemes, near Potlatch Beach. Because they occupied the only natural spring on the island, the Samish were forced off the island by their neighbors in 1912.

In 1841 Charles Wilkes of the United States Exploring Expedition gave the name "Lawrence Island" to Guemes Island, to honor the American naval officer James Lawrence. He also gave the name "Hornet Harbor" to Guemes Channel, for the USS Hornet, which Lawrence commanded during the War of 1812. To the waterway north of the island, part of Bellingham Bay, Wilkes gave the name "Penguin Harbor", for the British vessel Penguin, captured by Lawrence. These names disappeared after 1847, when the British Captain Henry Kellett reorganized the British Admiralty charts, in the process removing the "pro-American" names given by Wilkes and affirming pro-British names and Spanish names.

Guemes Island was also commonly known locally as Dog Island in the early 20th century, from the large number of Salish Wool Dogs living wild on the island.

The following Census statistics represent a block group that also contains the neighboring islands of Cypress Island, Sinclair Island, and Vendovi Island. As of the census of 2000, there were 605 people, 292 households, and 180 families residing in the block group There were 626 housing units. The racial makeup of the block group was 95.70% White, 1.16% African American, 0.83% Native American, 0.00% Asian, 0.00% Pacific Islander, 0.99% from other races, and 1.32% from two or more races. 1.32% of the population were Hispanic or Latino of any race.

There were 292 households, out of which 22.9% had children under the age of 18 living with them, 57.2% were married couples living together, 3.4% had a female householder with no husband present, and 29.0% were non-families. 30.8% of all households were made up of individuals, and 39.4% had someone living alone who was 65 years of age or older. The average household size was 1.95 and the average family size was 2.38.

The median income for a household in the block group was $40,039, and the median income for a family was unavailable. Income by sex was also unavailable, as was per capita income. 8.1% of the population was below the poverty line. Family poverty statistics were unavailable. Out of the total population, 36.1% of those under the age of 18 and 0.0% of those 65 and older were living below the poverty line.

Nautical and aeronautical charts note a magnetic disturbance off the southeastern tip of Guemes Island. The disturbance affects compasses enough to cause as much as 14° discrepancy from average local variation.

All content from Kiddle encyclopedia articles (including the article images and facts) can be freely used under Attribution-ShareAlike license, unless stated otherwise. Cite this article:
Guemes Island Facts for Kids. Kiddle Encyclopedia.