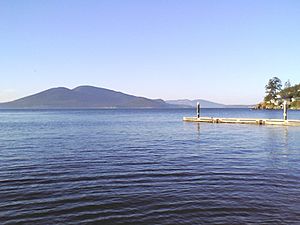 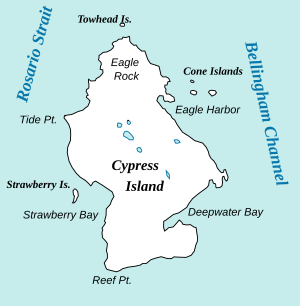 Cypress Island is the westernmost part of Skagit County, Washington and is about halfway between the mainland and offshore San Juan County. It is separated from Blakely Island to the west by Rosario Strait and from Guemes Island to the east by Bellingham Channel. The island has a land area of 5,500 acres (22 km2), and a population of 40 persons as of the 2000 United States Census.

The island is a popular destination for kayak trips due its relatively close proximity to the mainland and to the camping available at two sites on the east side.

Sheltered anchorages for boaters can be found in Eagle Harbor with public state park facilities.

Most of the island is underlain by ultramafic rock such as serpentinite, which provides a poor balance of nutrients to soils that develop on it. The island's common soil series is Guemes very stony loam. Limited areas of fertile non-ultramafic soils occur around the island's northern end and in small pockets elsewhere. Most of these are mapped as Catla gravelly ashy sandy loam.

Prior to homesteading in the early twentieth century, the island was used by the Samish tribe, which had a winter village established on nearby Guemes Island. Samish fishing villages were present on Cypress until 1900.

The first sighting of Cypress Island by Europeans was by the Spanish during the 1791 voyage of José María Narváez, who named it San Vincente. The island was named again by Captain George Vancouver in early June 1792, when he mistook juniper trees for cypress trees. Vancouver reports that the Chatham, one of the vessels in his party, lost an anchor in Strawberry Bay, on the west side of the island. Vancouver wrote:

The island of Cypress is principally composed of high rocky mountains and steep perpendicular cliffs which in the center of Strawberry bay fall a little back and the space between the foot of the mountains and the sea side is occupied by low marshy land through which are several small runs of most excellent water that find their way into the bay by oozing through the beach.

In 1975, the Washington Department of Natural Resources (DNR) designated 156 acres (0.63 km2) as a Natural Area Preserve, and added 56 more acres in 1978. At that time, however, most of the island remained in private hands.

Several attempts were made to develop the island. Spokane industrialist Raymond A. Hanson acquired 3,150 acres (12.7 km2) on Cypress Island in 1978 and, in the 1980s proposed first a large-scale public utility development and then a five-star resort and golf-course. Small land-owners on the island, organized in a group called "Friends of Cypress Island" fought both proposals. Hanson finally sold his land to the Department of Natural Resources in 1989.

This purchase along with subsequent, smaller purchases, have allowed the Natural Area Preserve to be expanded to 1,073 acres (4.34 km2), out of the 5,100 acres (21 km2) that comprise the Cypress Island Natural Resources Conservation Area.

The waters surrounding the island became a DNR Aquatic Reserve in 2007.

Panorama of the San Juan Islands from Eagle Cliff on Cypress Island.

All content from Kiddle encyclopedia articles (including the article images and facts) can be freely used under Attribution-ShareAlike license, unless stated otherwise. Cite this article:
Cypress Island Facts for Kids. Kiddle Encyclopedia.