The Guildhall is one of the main office buildings of the City and County of Swansea Council, designed by Percy Thomas and opened in 1934. 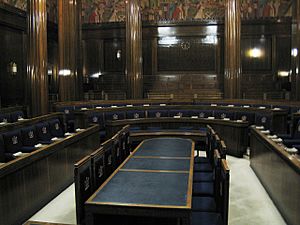 Before local government re-organisation in 1996 it was the headquarters for the former Swansea City Council. The Guildhall complex comprises the City Hall, Brangwyn Hall (concert hall) and the County Law Courts for Swansea. The Swansea Crown Court is now located in a building immediately opposite the Guildhall.

It was designed by architect Sir Percy Thomas and built on what was once part of Victoria Park. Construction began in 1930 and was completed in 1934, and the building was formally opened on 23 October of that year. At that time it was a somewhat controversial building, being representative of the modern movement in architecture, and was described as having a 'stripped classical' style. The building is finished in white Portland stone, and includes a tall art deco clock-tower, making it a landmark. Part of the clock-tower design features the prow of a Viking longboat, a reminder of Sweyn Forkbeard, thought to be the founder of Swansea.

All content from Kiddle encyclopedia articles (including the article images and facts) can be freely used under Attribution-ShareAlike license, unless stated otherwise. Cite this article:
Swansea Guildhall Facts for Kids. Kiddle Encyclopedia.