Gwynfor Richard Evans (1 September 1912 – 21 April 2005) was a Welsh politician, lawyer and author. He was President of the Welsh political party Plaid Cymru for thirty-six years and was the first Member of Parliament to represent it at Westminster, which he did twice, from 1966 to 1970, and again from 1974 to 1979.

On entering the House of Commons, he famously failed in his attempt to obtain permission to take the oath in the Welsh language. He was the first MP to attempt to do so, but the right to take the oath in any of the UK's native languages was not granted until 1974. His most notable achievement was his successful campaign for the creation of a Welsh-language television channel.

Gwynfor Evans was born in Barry, near Cardiff, to Dan Evans and Catherine Richard. He had a brother named Alcwyn, and a sister named Ceridwen. His father ran a chain of shops in Barry, and his mother a china shop. His mother was a fluent Welsh speaker. As a boy, he was educated at Gladstone Road School. Later on he was educated at Barry County School, where he was captain of the school's cricket and hockey teams. The area was mostly English-speaking; at school he began learning the Welsh language, but did not become fully fluent until the age of seventeen.

Evans studied at the University of Wales, Aberystwyth, and at St John's College, Oxford, from where he qualified as a lawyer. During his time at St John's, he became a member of the Dafydd ap Gwilym society there. He was also a market gardener. He was a teenager when the Welsh nationalist party Plaid Cymru was founded in 1925, and he founded a branch of the party while he was at Oxford. He became the party's president in 1945 and retained the office until 1981.

A pacifist, he became active in Heddychwyr Cymru, a Welsh organisation closely associated with the Peace Pledge Union, serving as secretary and editor of a series of pamphlets throughout the Second World War. A committed Christian also, he declared himself a conscientious objector, and was required to appear before a tribunal which, recognising the firmness of his beliefs, registered him unconditionally.

Evans is credited with keeping Plaid Cymru going through the lean years of the 1940s and 1950s. In the 1950s, he campaigned unsuccessfully for a Welsh parliament, and failed to prevent the damming of the Tryweryn River and consequent inundation of the Welsh-speaking community of Capel Celyn to supply the city of Liverpool with water, a cause célèbre in Wales in the early 1960s.

In 1962, Wales West and North Television, a group in which Evans was one of the leading figures, won the ITV franchise for western and northern Wales, but the venture failed because of financial difficulties, and the company was merged with Television Wales and the West, with western and northern Wales merged with the rest of Wales and the West of England, as a separate sub-region. 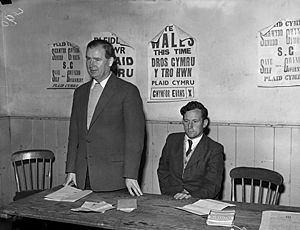 Evans speaking in Merioneth, during the 1959 UK Election

In 1964 Evans transferred his candidature to Carmarthen. On 14 July 1966, Evans won the parliamentary seat of Carmarthen from Labour in a by-election caused by the death of Lady Megan Lloyd George, daughter of the former Liberal Prime Minister, David Lloyd George, having come third in the general election just a few weeks before. He had also contested the seat at the 1964 general election. His by-election victory is regarded as a seminal moment for Plaid Cymru. He was shown around the House of Commons by fellow pacifist Emrys Hughes, the son-in-law of Keir Hardie; on pointing out the Welsh Labour table in the Commons' tea room, Hughes warned him, "You'd better not sit down there, your name's mud among that lot."

In the 1970 general election Evans lost his Carmarthen seat to Labour's Gwynoro Jones and failed to regain it in the February 1974 general election by only three votes. He regained the seat, with a majority of 3,640 votes, in the October 1974 general election, when he returned to Parliament accompanied by two other Plaid Cymru MPs, Dafydd Wigley and Dafydd Elis Thomas.

Career as an MP

In the House of Commons, Evans was true to his pacifist principles in being one of the few MPs to oppose the British government's support of the Nigerian federal government with supplies of weapons in the civil war against Biafra (1967–1970). He also opposed the Vietnam War: after being denied entry to the country as part of an inspection group, he instead protested outside a US air base in Thailand.

Evans was the first (and last) president of the Celtic League 1961–71. Dr. Robert McIntyre of the SNP was vice-president at the time.

In 1980, his threat to go on hunger strike, after the Conservative government reneged on its election promise of a Welsh language television channel, was instrumental in bringing about an early U-turn on the part of Margaret Thatcher, and S4C began broadcasting on 1 November 1982.

In his political retirement he became a prolific writer, mainly on Welsh subjects and writing in Welsh with simultaneous or later English editions. His work Aros Mae (It Endures) (published 1971), a comprehensive history of Wales, and the English-language version Land of my Fathers: 2000 Years of Welsh History (published 1974), had already become best-sellers.

In 1941 Evans married Rhiannon Prys Thomas, who survived him by nine months, dying on 13 January 2006. They had seven children. Their daughter, Meinir, became a prominent Welsh-language activist, and married Ffred Ffransis. 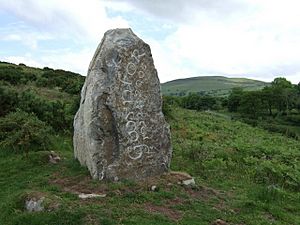 Gwynfor Evans memorial, on the approach to Garn Goch hillfort, near Llandeilo

On his death the Welsh political establishment united in paying its respects to Gwynfor Evans:

All content from Kiddle encyclopedia articles (including the article images and facts) can be freely used under Attribution-ShareAlike license, unless stated otherwise. Cite this article:
Gwynfor Evans Facts for Kids. Kiddle Encyclopedia.