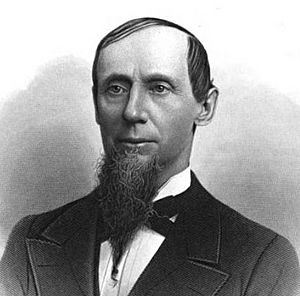 Born in Guilford, Vermont, Greenleaf attended the common schools and completed an academic course. He moved to Shelburne Falls, Massachusetts, and engaged in the manufacture of locks. He was appointed Justice of the Peace in 1856. He served as captain of Massachusetts Militia in 1857. Organized the Yale & Greenleaf Lock Co.. Enlisted as a private in the Union Army in August 1862. Commissioned captain of Company E, Fifty-second Regiment, Massachusetts Volunteers, September 12, 1862.

Greenleaf was elected colonel of the regiment October 23, 1862. He was employed in a salt works near New Orleans, Louisiana, for several years. He settled in Rochester, New York, in 1867 and resumed the manufacture of locks.

Greenleaf was elected as a Democrat to the Forty-eighth Congress (March 4, 1883 – March 3, 1885). He was an unsuccessful candidate for reelection in 1884 to the Forty-ninth Congress.

Greenleaf was elected to the 52nd United States Congress (March 4, 1891 – March 3, 1893). He was not a candidate for renomination in 1892. He resumed his former business activities until retirement in 1896. He died at his summer home in the town of Greece, near Charlotte, New York, on August 25, 1906. He and his wife Jean Brooks Greenleaf, a noted suffragist, were interred in Mount Hope Cemetery, Rochester, New York.

All content from Kiddle encyclopedia articles (including the article images and facts) can be freely used under Attribution-ShareAlike license, unless stated otherwise. Cite this article:
Halbert S. Greenleaf Facts for Kids. Kiddle Encyclopedia.