Hamilton (Kalispel-Pend d'Oreille: čɫc̓lc̓lécode: fla is deprecated ) is a city in and the county seat of Ravalli County, Montana, United States. The population was 4,659 at the 2020 census. 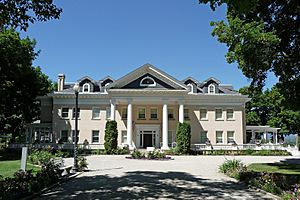 Hamilton was founded by copper king Marcus Daly in the late 19th century. It was named for J.W. Hamilton, who provided the right-of-way to the railroad. Daly is said to have wanted to begin business in the then county seat of Grantsdale, but was denied the opportunity. He supposedly founded Hamilton out of his own pocket as a reaction to being rebuffed at Grantsdale.

The Ravalli County Museum, founded in 1955, is located in the former Ravalli County Courthouse and focuses on County history, natural history and art.

In the summer of 2000, Hamilton made international headlines when forest fires throughout the Bitterroot Valley filled the area with smoke and prompted the evacuation of many residents. President Clinton declared a state of emergency in the area and dispatched National Guardsmen to assist with fighting the fires.

Hamilton is, as of 2004, home to two microbiological research and production facilities: the government-run Rocky Mountain Laboratories, and a branch of the Corixa Corporation (bought in the late 1990s from Ribi ImmunoChem Research, Inc.). The Corixa Corporation was bought by GlaxoSmithKline in 2005. NIAID completed construction of a Biosafety Level 4 biohazard laboratory as part of the Rocky Mountain Laboratories (RML) facility in 2008. This facility has begun operations using highly-pathogenic organisms including the Lentivirus family of viruses.

Hamilton has three Wards with two representatives from each Ward.

The Bitterroot Public Library serves the town of Hamilton. It was one of the 17 Carnegie libraries built in Montana.

Ravalli County Airport is a public use airport 1 mile east of town.

All content from Kiddle encyclopedia articles (including the article images and facts) can be freely used under Attribution-ShareAlike license, unless stated otherwise. Cite this article:
Hamilton, Montana Facts for Kids. Kiddle Encyclopedia.