The Harbor Towers are two 40-story residential towers located on the waterfront of Boston, Massachusetts, located between the New England Aquarium and the Rowes Wharf mixed-use development. Harbor Towers I, the taller of the two towers, stands at 400.0 feet (121.9 m), while Harbor Towers II rises 396 feet (121 m). Harbor Towers I is in a tie as 29th-tallest building in Boston. They were designed by Henry N. Cobb of I. M. Pei & Partners.

Initially built as affordable rental housing, the Harbor Towers opened in 1971. At the time, the area surrounding the project was a warehouse district with derelict abandoned spaces and many surface parking lots. 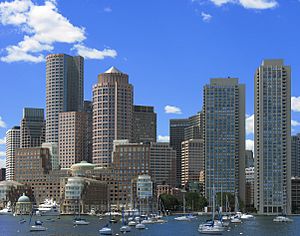 The Harbor Towers apartment complex was completed in 1971 by the Berenson Corporation, as an affordable housing option near Boston's financial district. The towers are well known in the architectural community, having been designed by Henry N. Cobb, who also designed Boston's John Hancock Tower and collaborated with Pei on Boston's City Hall Plaza, of I.M. Pei]] & Partners (now Pei Cobb Freed & Partners). At 40 stories, they are the city's tallest residential towers. Sponsored by the Boston Redevelopment Authority (BRA), as a way to bring new life to Boston's waterfront, which was at that time an ugly wasteland area mostly made up of abandoned, trash-filled spaces and parking lots, the project became a cornerstone for future progress in the area.

Originally planned with three 40-story towers, the development only built two, along with a parking garage. The much-derided design has garnered many critics in Boston for its "brutalist" architecture, a style that was thought to be inconsistent with historic Boston. In particular, the surrounding area includes sites such as the waterfront area and the North End, which is known for its Italian community and its preservation of 17th- and 18th-century architecture.

As the growth of the city moved toward the waterfront, the unparalleled nature of the apartment towers' location, and harbor and city views drew the attention during the "condominium conversion" craze of the early 1980s. In 1981, both apartment towers started a two-year process of conversion to over 600 condominiums, with special incentives for existing renters to purchase at heavily discounted prices. Many of these early apartment renters now own several units, often combined to create wrap-around units with as much as 5,000 square feet (460 m2) of living space. Some of these "early adopters" now own multimillion-dollar units, with as little as US$100,000 to $200,000 total investment. Newcomers to the building buy units for $600,000 to as much as $3 million, paying for the harbor and city views and also for the location.

The more recent development of the adjacent Rowes Wharf/Boston Harbor Hotel, a landmark development of significant architectural and aesthetic significance to the city's skyline, as well as the expansion of the New England Aquarium, have made the twin towers even more desirable. The completion of the Central Artery Project (The Big Dig), with its expansive necklace of greenspace, the Rose Kennedy Greenway, gardens, and public space, has made these now historic apartment buildings central characters in the most costly urban improvement project in US history at the time.

Over the decades, the towers have required major renovations, including the replacement of all the windows with high-end double-pane windows, as well as replacement of the electrical and HVAC systems. Severe corrosion of the heating and cooling water pipes led to them being replaced by copper pipes in 2009.

The apartments are organized in a pinwheel fashion around a central core, and are made of cast in place reinforced concrete. The concrete exterior balconies have a giant zipper-like appearance against the flat facade.

The stainless steel sculpture at the base of the buildings is Untitled Landscape by David von Schlegell, and was created in 1964. The artwork is often mistaken for solar panels.

Any school-age children living in the towers are eligible for the Boston Public Schools. For elementary and middle school, students may apply to:

All high schools are "citywide."

All content from Kiddle encyclopedia articles (including the article images and facts) can be freely used under Attribution-ShareAlike license, unless stated otherwise. Cite this article:
Harbor Towers Facts for Kids. Kiddle Encyclopedia.