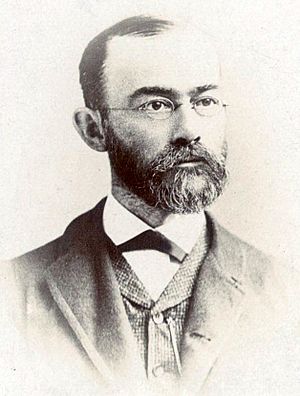 Harrison Allen (1841–1897) was an American physician and anatomist, born in Philadelphia. He graduated from the medical department of the University of Pennsylvania in 1861, and in 1862 became a surgeon in the United States Army and served until the conclusion of the Civil War in 1865. Doctor Allen should not be confused with the Union Army officer who was colonel of the 151st Pennsylvania Volunteer Infantry Regiment, who was mustered out July 31, 1863 and later was awarded the grade of brevet brigadier general.

In 1865 he was made professor of comparative anatomy and medical zoölogy at the University of Pennsylvania. He was transferred in 1878 to the chair of physiology, which he occupied until 1895.

In 1867, he was elected as a member to the American Philosophical Society.

All content from Kiddle encyclopedia articles (including the article images and facts) can be freely used under Attribution-ShareAlike license, unless stated otherwise. Cite this article:
Harrison Allen Facts for Kids. Kiddle Encyclopedia.