Kids Encyclopedia Facts
This page is about the person. For the company, see Harry Winston, Inc..

Winston founded the Harry Winston Inc. in New York City in 1932. He had been called by many as the "King of Diamonds".

Winston's father Jacob started a small jewelry business. He and Winston's mother were Jewish immigrants to the United States from Ukraine. While growing up, he worked in his father's shop. When he was twelve years old, he recognized a two-carat emerald in a pawn shop, bought it for 25 cents, and sold it two days later for $800. Winston started his business in 1920 and opened his first store in New York City in 1932.

Winston's jewelry empire began in 1926, with his acquisition of Arabella Huntington's jewelry collection, for $1.2 million. The wife of railroad magnate Henry E. Huntington, Arabella amassed one of the world's most prestigious collections of jewelry, largely from Parisian jewelers such as Cartier. When Winston bought the collection after her death, the designs of the jewelry in the collection were quite old fashioned. Winston redesigned the jewelry into more contemporary styles and showcased his unique skill at jewelry crafting.

When he died, Winston left the company to his two sons, Ronald and Bruce, who then entered into a decade-long battle over the control of the company. In 2000, Ronald along with new business partner, Fenway Partners, bought Bruce out from the company for $54.1 million. 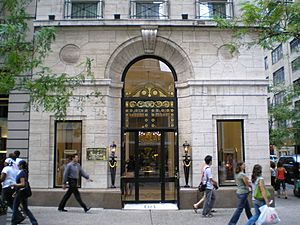 Winston was among the most noted jewelers in the world, well-known to the general public. In the 1953 musical film Gentlemen Prefer Blondes, the song "Diamonds Are a Girl's Best Friend" includes the spoken interjection "Talk to me, Harry Winston, tell me all about it!" The Lauren Weisberger comic novel, Chasing Harry Winston, was published in May 2008. 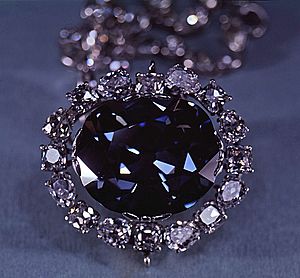 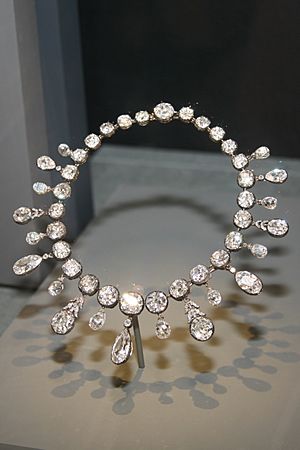 All content from Kiddle encyclopedia articles (including the article images and facts) can be freely used under Attribution-ShareAlike license, unless stated otherwise. Cite this article:
Harry Winston Facts for Kids. Kiddle Encyclopedia.