Harvard Heights is a densely populated, mixed-income neighborhood of 20,000+ people in Central Los Angeles, California. Within in it lies a municipally designated historic overlay zone designed to protect its architecturally significant single-family residences, including the only remaining Greene and Greene house in Los Angeles.

The neighborhood has one private and two public schools. It is the site of a private library dedicated to the memory of singer Ray Charles. 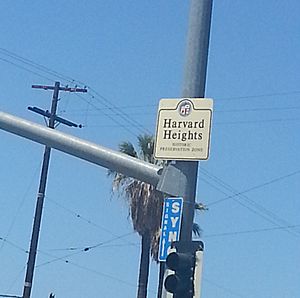 In 1997, historian Leonard Pitt and writer/editor/indexer Dale Pitt described Harvard Heights as a

neighborhood between Western and Normandie Avenues and Pico and Washington Boulevards. It was part of the West Adams district, a middle-class area annexed by the city of Los Angeles early in the century. Two-story Craftsman-style Victorian homes still abound there.

Since 2000, the City of Los Angeles Planning Department and Office of Historic Resources has defined the Harvard Heights historic neighborhood as encompassing 34 blocks comprised predominantly of single-family residences, some multiple-family residences, as well as commercial properties. The designated historic zone lies between Pico Boulevard on the north, Washington Boulevard to the south, Normandie Avenue on the east and Western Avenue on the west.

The Mapping L.A. project of the Los Angeles Times defines Harvard Heights as a broader area, flanked by Koreatown to the north, Pico-Union to the east, Adams-Normandie and Jefferson Park to the south and Arlington Heights to the west. The street boundaries are given as north: Pico Boulevard; east: Normandie Avenue; south: Washington Boulevard; and west: Western Boulevard.

Relation of Harvard Heights to other communities:

Harvard Heights has been noted as a "once grand neighborhood that was in danger of falling apart. . . . The overall population was old and largely African American as whites migrated to the suburbs, the freeway bisected the neighborhood, and most of the homes had been converted into apartments. . . . [but the] neighborhood's long-anticipated renaissance took place in the late '90s. As Los Angeles commutes got longer and longer, white-collar professionals began moving back into the city.

Harvard Heights has been called a "preservationist's dream come true," a neighborhood characterized by the Craftsman houses built on the heights southwest of downtown, primarily between 1902 and 1910. Today, Harvard Heights boasts the only remaining Greene and Greene house (Historic Cultural Monument #991) in Los Angeles, "as well as homes built by the Heinemann brothers (Historic Cultural Monument #818), Hunt and Eager, and especially noted architect Frank M. Tyler."

According to a 2005 Los Angeles Times headline, Harvard Heights was "a stately turn-of-the-century neighborhood that has been undergoing a restoration boom after decades of hard times. [The] [e]xquisite woodwork, high ceilings, formal dining rooms, cozy inglenooks and stained-glass windows are some of the features that attract residents to [the] spacious two-story homes" found in the area."

In 2005 it was said that "Although prices are rising steadily, Harvard Heights remains an affordable choice for people interested in large historic homes. Two-story homes here are a relative bargain when the square footage and features are compared with similarly priced structures in other neighborhoods."

Exquisite woodwork, high ceilings, formal dining rooms, cozy inglenooks and stained-glass windows are some of the features that attract residents to these spacious two-story homes. For those who work downtown, the area's proximity to the city and the Santa Monica Freeway make it an easy commute.

The architecture of the neighborhood has also made the area a favorite for film and television location scouts.

According to the Mapping L.A. project of the Los Angeles Times, the 2000 U.S. census counted 18,587 residents in the 0.79-square-mile neighborhood—an average of 23,473 people per square mile, one of the highest densities in Los Angeles. In 2008 the city estimated that the population had increased to 20,194. The median age for residents was 30, about the same as the city norm.

The median household income in 2008 dollars was $31,173, a low figure for Los Angeles, and a high percentage of households earned $20,000 or less. The average household size of 3.2 people was high for the city of Los Angeles. Renters occupied 84.3% of the housing units, and house- or apartment owners the rest.

The percentages of never-married men and women, 50% and 48,2%, respectively, were among the county's highest. The 2000 census found 939 families headed by single parents, a high rate for both the city and he county. There were 501 military veterans in 2000, or 3.8%, a low figure for Los Angeles. 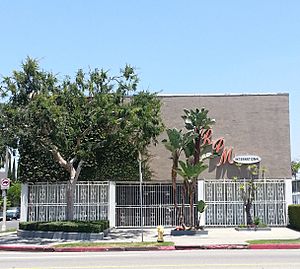 In September 2010, the original site of singer Ray Charles’s recording studio and office on Washington Blvd (Historic Cultural Monument #776), was rededicated as the Ray Charles Memorial Library. The Library contains exhibit space including memorabilia, awards, and interactive music displays of the famous musician.

In February 2013, the often filmed Spanish Colonial revival themed Pacific Bell Building (Historic Cultural Monument #331) was rehabilitated for adaptive reuse and reopened as the Jane B. Eisner charter middle school in the middle of the Harvard Heights neighborhood.

In 2013, the Los Angeles Neighborhood Initiative, in partnership with the City of Los Angeles and local stakeholders, will break ground on the Normandie Cordova Public Park project, located on the current vacant land at the west side of the intersection of Normandie and Cordova. This pocket park project is expected to amplify the community friendly green space, and will include recreational spaces for both adults and children in the Harvard Heights neighborhood.

All content from Kiddle encyclopedia articles (including the article images and facts) can be freely used under Attribution-ShareAlike license, unless stated otherwise. Cite this article:
Harvard Heights, Los Angeles Facts for Kids. Kiddle Encyclopedia.