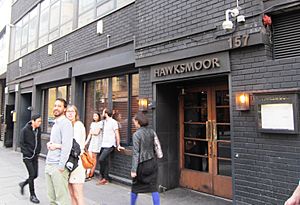 The first branch of Hawksmoor in Spitalfields.

Hawksmoor is a British steakhouse and cocktail bar chain. The original establishment is in Spitalfields, near to where the architect Nicholas Hawksmoor built Christ Church. Subsequently, there are five other restaurants in London: in Seven Dials, Air Street nearby Piccadilly Circus, Knightsbridge, Guildhall district of the City and Borough, near Borough Market. Hawksmoor also have two restaurants outside of London, Hawksmoor Manchester on Deansgate, near Spinningfields and Hawksmoor Edinburgh opened in 2018, just off St Andrews Square. Hawksmoor New York will be opening in 2021, in the recently restored Assembly Hall at the United Charities Building, on 22nd Street and Park Avenue South.

In February 2020, Hawksmoor was recognized at the Best Companies to Work For special awards 2020 in the "Innovation in Engagement" category.

All content from Kiddle encyclopedia articles (including the article images and facts) can be freely used under Attribution-ShareAlike license, unless stated otherwise. Cite this article:
Hawksmoor (restaurant) Facts for Kids. Kiddle Encyclopedia.