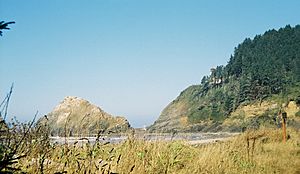 Heceta Head and lighthouse surrounded by salal meadows, rhododendrons and Sitka spruce groves with Parrot Rock to the left

Heceta Head (how to say: /həˈsiːtə/, hə-SEE-tə) is a headland that stands 1,000 feet (300 m) above the Pacific Ocean in Lane County, Oregon, United States. The Heceta Head Light is located on its south side. Heceta Head is named after the Basque explorer under Spanish Commission, Bruno de Heceta, who explored the Pacific Northwest in the 1770s. The headland marks the end of a lower-lying stretch of the coastline to the south dominated by sand dunes; the coastline to the north is more varied. Devils Elbow is the bay south of the headland at the mouth of Cape Creek, and with the headland formed Devils Elbow State Park, which is now part of Heceta Head Lighthouse State Scenic Viewpoint. 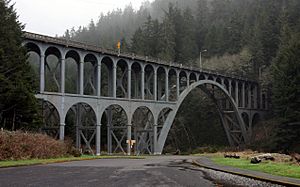 Cape Creek Bridge, at the heart of Heceta Head Lighthouse Scenic Viewpoint, is the first bridge in the world to have zinc thermal sprayed over the entire structure.

All content from Kiddle encyclopedia articles (including the article images and facts) can be freely used under Attribution-ShareAlike license, unless stated otherwise. Cite this article:
Heceta Head Facts for Kids. Kiddle Encyclopedia.